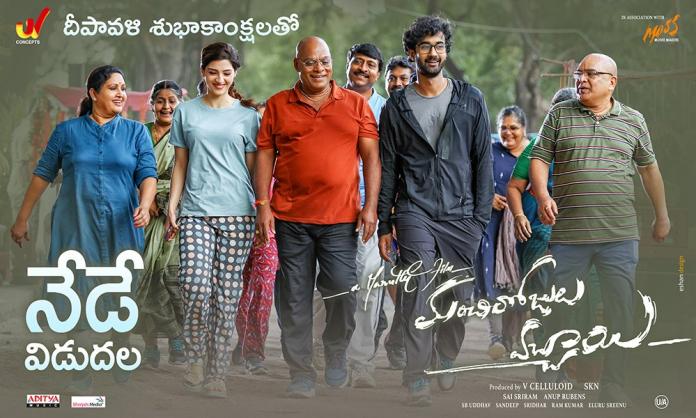 Noted director Maruthi’s new film, Manchi Rojulochaie with Ek Mini Katha fame Santosh Shoban has been carrying decent buzz among the audience. Co-starring Mehreen as the female lead, the film is out for public viewing today. Let’s check how it is.

Gopalam Thirumalashetti (Ajay Ghosh), a person with a weak and fearful mindset. Identifying Gopalam’s nature, his colony mates and will create doubts about his elder daughter Padmini’s ( Mehreen) relationship status. True to Gopalam’s doubt, Padmini will be in a relationship with a guy named Santosh (Santosh Shoban). But Padmini’s love will get a rejection from Gopalam for obvious reasons. The rest of the story is about how Santosh tries to impress Gopalam and gets a green signal for his love.

Santosh Shoban is convincing in his role as a desperate lover. Compared to Ek Mini Katha, Santosh has shown mature performance. His chemistry with Mehreen is adorable as they both make a good pair on screen.

Heroine Mehreen is okay with her performance but her look in a slim avatar literally took away the glow in her face. Though she has limited screen time, her acting in emotional father-daughter episodes brings depth to the proceedings to an extent.

Actor Ajay Ghosh is the show-stealer as the film is an emotional family drama that revolves around his character. He acted effortlessly in the given character as a doubtful yet lovable father. As most of the film runs on his character-centric, Ajay Ghosh gave a good performance and elevated the emotional content nicely.

Other artistes who played Ajay Ghosh’s friends roles are decent in their roles. The film has noted comedians such as Vennela Kishore, Sapthagiri, Viva Harsha, Srinivas Reddy, Sudharshan and Praveen but none of them were utilised in a proper manner. The comedy that has been generated by the above comedians fail to evoke laughs.

Music by Anup Rubens is alright as his songs are passable on the screen. His background score is okay but has nothing much to put it here.
The cinematography by Sai Sriram is decent as he tried to present the film with good quality. Editing work is adequate. Production values for this limited budget movie are good.

Coming to the director, Maruthi who is known for making films by pointing at one of the defectives in a person and narrating the film with comic touch has once again tried to showcase the fear element in a person. Though the core concept is good, Maruthi failed miserably in executing the film in the right manner.

Verdict: In an overview, Manchi Rojuluochai is a message-oriented family drama that lacks proper character establishment and effective narration. Except for the performances from the actors, the movie offers nothing new to the audience. Cashing in on the Diwali festival weekend, the film may get a decent opening at the ticket windows but will definitely fail to create any impact. All we suggest is to skip watching the film in the theatres now and catch it when aired on television or after premiered on the OTT platform.

8:15PM: Showtime – Movie starts with two of Ajay Ghosh’s (Gopalam) friends ingesting doubts in his mind about his daughter having a love affair with her colleague..

8:45PM: Gopalam goes to police station to give a complaint on his daughter’s lover Santosh (Shoban)..Paddu ( Mehreen) listens to her father and stops talking to Santosh

9:15PM: Appadala Vijay Lakshmi scene by RP brings some laughs. Ajay Ghosh gets heart attack because he has weak heart. He is very sensitive and overthinks everything. Interval time

9:45PM: Some serious drama going on..Ajay Ghosh wants to join in hospital as he has fear of death. Vennela Kishore as doctor is good

10:40PM: Movie completed with a happy note and Gopalam leaving all his fears..