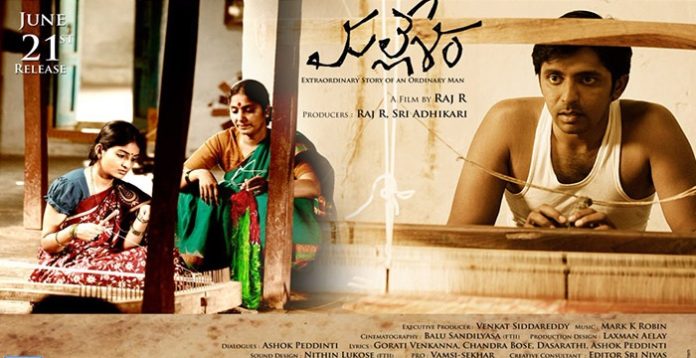 Mallesham (Priyadarshi) belongs to a family whose livelihood is handlooms. His mother (Jhansi) falls ill after working for long hours in weaving. The doctors then declare that her hand can get paralyzed if she continues doing the weaving. Mallesham then decides to invent a special machine through which the weaving can be done easily. The rest of the story is about the struggles, he faced in inventing the machine.

The struggles handloom weavers face have been showcased well in the film. Priyadarshi as Mallesham has excelled in his acting skills. He adopted the character well and tried to portray the real Mallesham through his body language as perfectly as he could. Ananya as Mallesham’s wife is decent. Jhansi came out with a supernatural performance once again, as she does every time. Rest other roles are satisfactory.

The major credit of Mallesham movie goes to the director. He managed to set the cinematic feel to the real story and thus made it engaging, rather than showing it as a documentary. He portrayed the struggles of handloom weavers extremely well.

Mark K Robin’s music is apt to the mood of the film. The Camera work is good and so are the production values. A few unwanted scenes could have been chopped off, to make the content crisp and clear.

The director majorly focused on the characters and tried to elevate them, leaving the crux. A bit more care on the proceedings and also the screenplay would have made Mallesham a better fare at the box office. The story moves at a slow pace, but it takes off beautifully giving an insight into the people and culture of rural Telangana.

But the main point which the entire story deals with, was not established well. The second half deals with the things that are not linked to the crux and suddenly many things fall in place at the climax, that needs a mention. The proceedings thus get hurried and have an abrupt ending.

Finally: Mallesham- a one time watch