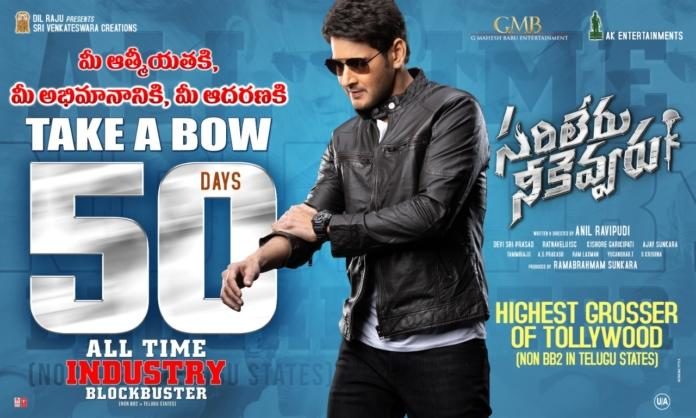 Super Star Mahesh Babu’s last film Sarileru Neekevvaru which was released for Sankranthi on January 11th, 2020 by today has completed 50 days. Sarileru Neekevvaru though termed as a routine entertainer, with the help of Mahesh’s star power and Sankranthi holiday advantage has turned out into a massive hit. It has collected more than 100 Cr share in Telugu states alone. The movie is directed by Anil Ravipudi and produced by Anil Sunkara, Dil Raju. Even Mahesh’s GMB Entertainments is a part of the production.

Being a typical commercial entertainer, Anil Ravipudi has showcased Mahesh in a massy avatar which is liked by the fans. His dances in Mind Block song brought treat for the fans. Overall Sarileru Neekevvaru is a memorable film for both Mahesh and his fans.

Super Star Mahesh who took break after Sarileru Neekevvaru’s success is all set to okay 2 movies. He will be playing an important role in Mega Star Chiranjeevi’s upcoming film titled Acharya in the direction of Koratala Shiva. Next he might give his nod to Parasuram’s script. The decision will be taken very soon.