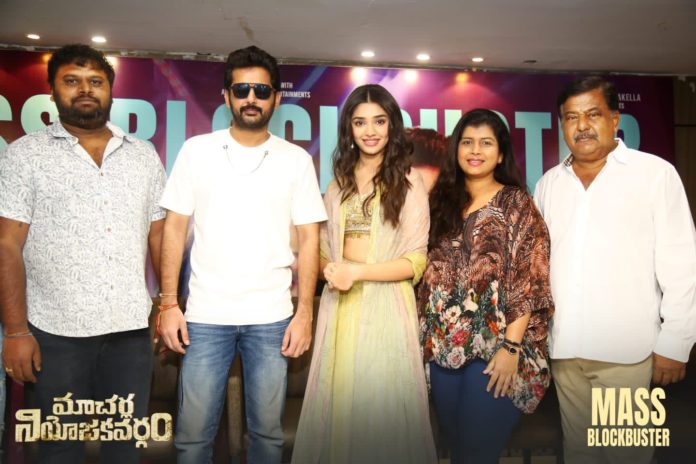 Young and versatile hero Nithiin’s mass commercial action entertainer ‘Macherla Niyojakavargam’ got a decent response from the audience. Produced by Sudhakar Reddy and Nikitha Reddy under the banner of Sreshth Movies, the movie is directed by MS Raja Shekhar Reddy. Krithi Shetty and Catherine Tresa have played the female leads.

As the film became a hit, the movie team organized a press meet to thank the audience.

On this occasion, Nithiin said, “A big thank you to the Telugu audience. They gave me the best openings in my career. I believed that your encouragement will always be there, and my belief has come true once again with ‘Macherla Niyojakavargam’. After a long time, I changed my genre and went into action. Audience received it wonderfully. I saw the movie in the theatre with the audience. The claps and whistles you give to the action and comedy scenes give a good cheer. The revenue of the movie is very good. It is a pleasure to get such a good opening at such a time. I will continue to work hard and make good films. Thank you once again to the audience for supporting the film so much.”

Krithi Shetty said, “Collecting Rs 10 crore on the first day is not an ordinary thing. Thanks to the Telugu audience. There is also a long weekend. Come with your family and enjoy the movie. Macherla is a family entertainer. Thanks to all our team.”

Director MS Raja Shekhar Reddy thanked the audience for giving the biggest opening to Nithiin. He also thanked the producers for their support.