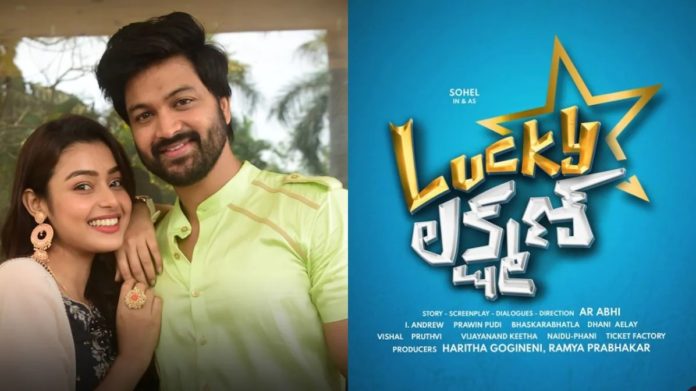 The film is about a middle-class guy named Lucky Lakshman (Sohel). He hates his father as he feels his father couldn’t give him a rich life. Lakshman later falls in love with Shraddha (Mokksha) in his first year of college but eventually breaks up in the final year. After college Laksham gets the idea to start a marriage bureau. What life lessons will he learn in this whole process forms the rest of the story.

Big Boss fame Sohel does a pretty decent job with the film. He gets ample scope to showcase different emotions and he tried to use the opportunity to the best of his abilities. He surely is a potential actor but he still needs to work a bit on his body language and dialogue delivery.

Heroine Mokksha looks pretty on screen and does well in the love portions. Her chemistry with Sohel is good.

The actors who played Sohel’s friends- Anurag & Ameen are fine in their parts but few noticeable actors could have made a big difference to the film.

Devi Prasad scores well on the emotional front towards the end as the hero’s father while Sameer makes his presence felt in a short role as the coffee shop owner.

The rest of the cast are okay in their respective supporting roles.

Director AR Abhi’s presentation is trendy. But he should have made the narrative a bit more crisper. His story lacks novelty and there is no scene that looks fresh on screen. His screenplay too is pretty half-baked. The triangle phone conversations, a few marriage bureau scenes, and the emotional ending are the only scenes that work in the film.

Cinematography by I. Andrew is good while the editing by Prawin Pudi needed more crispness.

The songs by Anup Rubens fail to register. The title song is the only song that looked okay. His background score is fine.

Verdict: Overall Lucky Lakshman is a decent outing for Sohel as an actor but the content does not have anything fresh to give the viewers. If you keep your expectations limited, then this film could be a time pass watch.