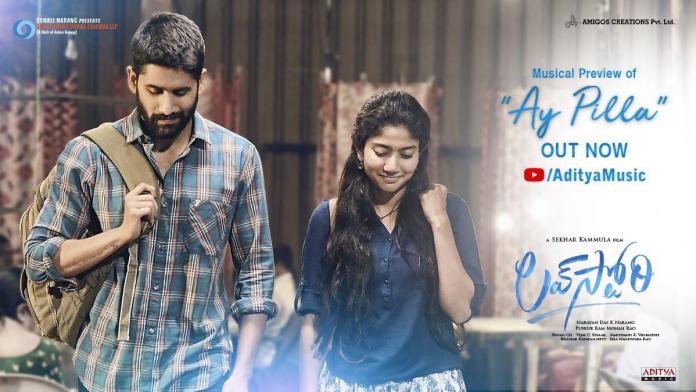 Sekhar Kammula is known for creating good feel through his love stories. He is becoming a master in it. After the super successful Fidaa, Sekhar Kammula is back with another love story which carries the same title. Love Story stars Naga Chaitanya and Sai Pallavi in lead roles.

Naga Chaitanya is back on two successive hits and Sai Pallavi, Sekhar Kammula combo has Fidaa craze. So Love Story is a film which has been one of the most awaited movies. Shooting of the film is almost completed and makers are looking to release the movie in the month of April.

On the occasion of Valentine’s day, Love Story’s first single Ay Pilla musical preview got released. The song is soulful to hear. Lyrics are heart touching and music is graceful. Looks like Sekhar Kammula has once again succeeded in getting simple love story right. Scenes shown in the preview are very simple but effective. There is Sekhar Kammula mark all over it.

Highlight of the preview is definitely the last scene where Sai Pallavi kisses Naga Chaitanya and the latter gets emotional with it. Love Story has music by Pawan Ch and it is being produced by Narayan Das K Narang and Puskur Ram Mohan Rao.