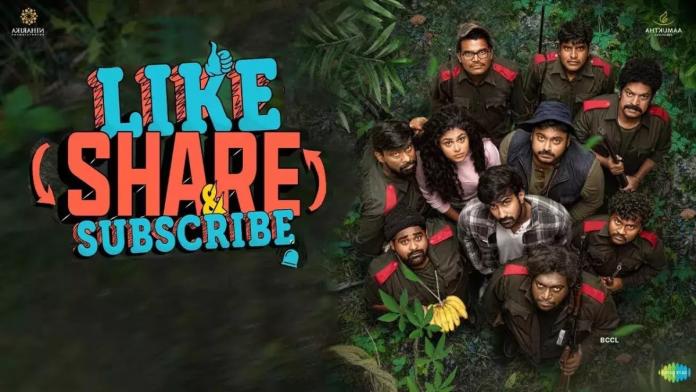 One of the most talented upcoming young actors in Tollywood is Santosh Sobhan, whose new movie, Like Share and Subscribe has been released today. Here’s how the film has turned out to be:

The story is about Vihari and Vasudha, two travel vloggers who happen to meet while on a trip to Araku. Here, the two are kidnapped by a rebellious group named PPF. Why are they kidnapped and how do they escape forms the rest of the story.

Santosh tries to do the best in whatever he’s been given to work with, and puts in good efforts. However, they don’t pay off, as the story doesn’t do much to support his performance.

Faria Abdullah looks good but is very stiff in her role, and doesn’t fit the vlogger bill appropriately. While the film boasts of a very good supporting cast, they are all wasted in their roles.

The director, Merlapaka Gandhi, has most certainly chosen a very current subject, in the form of vlogging, which would definitely cater to the current generation’s audience very well. However, the uniqueness and the relatability of the concept are lost very quickly. From the moment the lead pair is kidnapped, the film becomes very stale, with the comedy becoming very cringe and the performances becoming very hammy.

The production values are quite good, and the camera work is appropriate. The music is okay, but hasn’t done much to help the movie at all, and sounds almost like it’s there for the sake of it. The editing could have been so much better.

Verdict: There’s not a single saving grace for Like Share and Subscribe, as it turns out to be worthy of just dislikes. The movie barely even qualifies for a time-pass watch. The comedy that was hyped from the film falls very flat, and not even Santosh’s performance has been able to redeem the film.