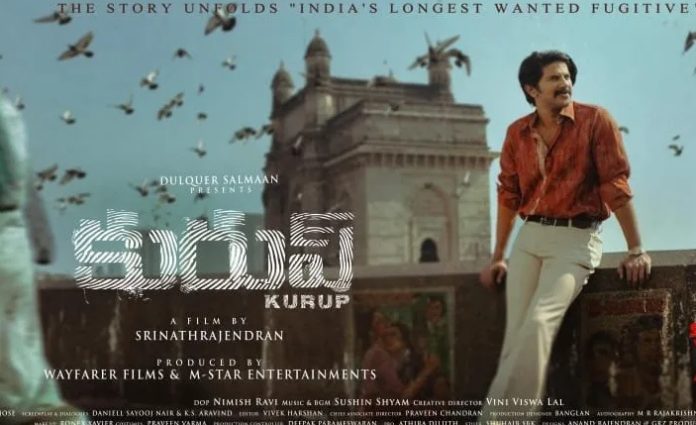 Mollywood star Dulquer Salmaan and actress Sobhita Dhulipala’s Kurup has caught the audience attention with its promotional stuff. Directed by Srinath Rajendran, the film had a simultaneous release in Telugu with the same title. Let’s analyze it.

The film explores the crime world of a notorious criminal named Sudhakar Kurup. What are Kurup’s crime activities? What kind of challenges will Kerala police undergo to track Kurup’s identity? Forms the main USB of the film.

Dulquer Salmaan potrayed the role of Sudhakar Kurup effortlessly. His commanble performance and outstanding screen presence as a fugitive adds so much of depth to the proceedings. In one word, his presence brings authentic flavour to this crime drama.

Sobhita Dhulipala is alright in her prominent role as Dulquer’s wife. Other actors such as Indrajith Sukumaran, Shine Tom Chacko, Sunny Wayne and Bharath Niwas are apt in their respective supporting roles.

Music by Sushin Shyam is a backbone for this period crime thriller. While his songs are situational and passable on the screen, Sushin’s background score elevates the mood of the film in an effective manner.

Cinematography by Nimish Ravi is outstanding as he tried to bring the required rustic texture on the screen with his lighting setup. Story by Jithin K Jose is simple but has novelty.

In an overview, set in early 70s time period, Kurup showcases the crime world of a runaway army man, who eventually turns as a notorious criminal. While Dulquer Salmaan’s acting and his mannerisms are a treat to watch on the screen, director Srinath Rajendran’s execution will impress the audience big-time. If you love watching crime dramas, Kurup will end up as a satisfactory watch for sure.

Starring Vikram and Amrutha Chowdary in lead roles, Vikky The Rockstar is an intriguing new-age film which is being directed by CS Ganta. The makers...
Read more
Movie News

After impressing the audience with two songs -Akdi Pakdi and Waat Laga Denge, the makers of Vijay Deverakonda's Liger delighted the audiences with the...
Read more

Starring Vikram and Amrutha Chowdary in lead roles, Vikky The Rockstar is an intriguing new-age film which is being directed by CS Ganta. The makers...
Read more
Movie News

Veteran actor Prudhvi Raj, who is famous for his ‘Thirty Years of Industry’ dialogue, is now all set to join Powerstar Pawan Kalyan led...
Read more