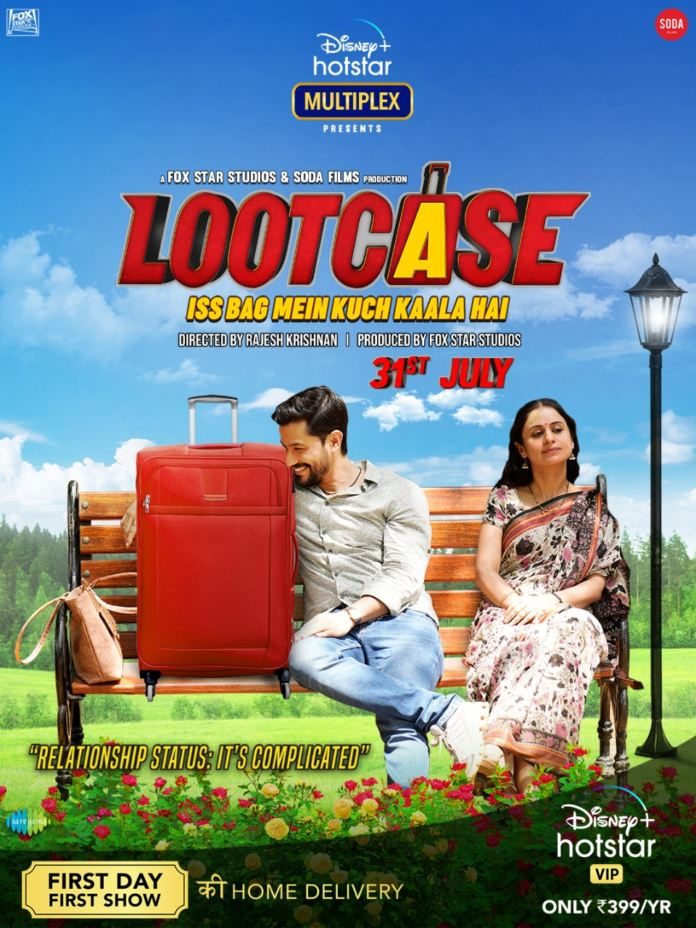 Joining the long list of films which are getting a direct OTT release, Lootcase, a Bollywood comedy drama featuring Kunal Khemu was released on Disney Hotstar a short while ago. Read on to see if the film has what it takes to keep the viewers engaged all the way through.

Nandan Kumar, a middle-class employee finds a suitcase filled with cash while on his way back to home. He takes the suitcase home not knowing what to do with it. He is unaware that he is set to face numerous challenges for keeping hold of this suitcase. What are the troubles that he faces? Whom does the suitcase belong to? How does finding this suitcase impact Nandan’s life? To know the answers, you must watch the film.

Kunal Khemu as a middle-class employee is quite impressive. He has the right body language and witty attitude to carry this role. Sadly, his performance is one of the very few prospects of the film. Rasika Dugal delivered a good performance and so did the supporting cast, Gajaraj Rao, Vijay Raj, and Ranveer Shorey.

Lootcase is a comedy drama which revolves around a suitcase, as indicated in the trailer. But subjects like these were largely explored in Bollywood. There’s nothing new about the story or the basic set-up. The film offers very little humor and fun, which is a huge letdown. Only certain scenes which were shown in the trailer evoke laughs. The director, Rajesh Krishnan tries to bank on situational comedy but he fails to create the optimal situations to generate humor.

Cinematography is decent. There isn’t much scope for music in the film and the music directors, Rohan-Vinayak, and Amar Mangrulkar do reasonably well within their limitations. Editing could have been much better.

Lootcase, a supposed comedy entertainer does not have adequate humor quotient, and on top of that it tests the patience of the viewers. Rather than watching the 132 minutes long film, one can simply watch the 3 minute trailer and have some fun at least. It fails to keep the viewers engaged even for a 5-minute period in its 2-hour long run-time.

You can comfortably skip watching this tedious flick.

The ongoing schedule of Megastar Chiranjeevi‘a Acharya has been cancelled following Ram Charan’s decision to halt his current commitments. Well, there is a heartwarming...
Read more
Movie News

It is well known that many rumours spread by wagging tongues that Parth Samthaan would make his Bollywood entry has finally come true. The...
Read more
Movie News

Renowned actor Vivekh famous for his work in the Tamil film industry breathed his last yesterday and the cine fraternity has been wishing condolences...
Read more
Movie News

Janasena supremo Pawan Kalyan tested positive for Covid a couple of days ago and he is receiving medical attention now. He is being treated...
Read more
Political News

Exit poll survey of Nagarjunasagar by-poll: TRS is going to retain the seat..?

The Narajunasagar by-elections polling has been ended. Nomula Bhagat from TRS, K Janareddy from Congress, and P Ravi Kumar from BJP are vying for...
Read more
Political News

The director of the state public health department Dr. Srinivas said that the process of corona vaccination will be halted in Telangana tomorrow. He said...
Read more
Political News

The number of corona positive cases is increasing exponentially in India. Under these circumstances, the government imposed restrictions in Krishna and Guntur districts. Permission has...
Read more

Janasena supremo Pawan Kalyan tested positive for Covid a couple of days ago and he is receiving medical attention now. He is being treated...
Read more
Photo Gallery

The ongoing schedule of Megastar Chiranjeevi‘a Acharya has been cancelled following Ram Charan’s decision to halt his current commitments. Well, there is a heartwarming...
Read more
Movie News

Neil Nitin Mukesh announced on Instagram that he and his family members have tested positive for the novel coronavirus during second wave. Neil and...
Read more