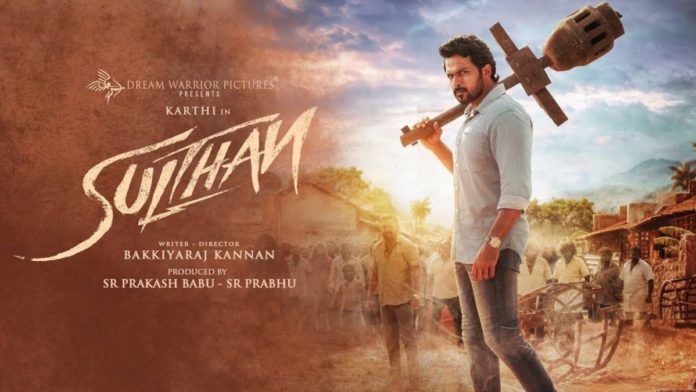 Sulthan, starring Karthi and Rashmika Mandanna in the lead roles is billed to be a proper commercial entertainer. The film is directed by Bakkiyaraj, who previously helmed a Tamil film named Remo. Let us see what Sulthan has to offer.

Story: Sulthan(Karthi) is a robotics engineer who aspires to launch his own company in Japan. But with the untimely demise of his father, Sulthan has to look after the latter’s 94-men army and also fight for farmers in his region. In the process, he has to come up against Sethupathi (Ramachandra Raju) a crooked gangster who plans to grab agricultural lands from farmers. The rest of the story unveils Sulthan’s journey henceforth.

Karthi is an all-rounder and he proves the same with Sulthan. He plays a typical mass masala male lead in the commercial potboiler. He excels in emotional scenes and action episodes alike. Rashmika Mandanna plays a village belle and she fits the specifications of the character. Her attitude and mannerisms are very good. The love track between the duo will please the youth. The rest of the support cast ably support the narrative.

The basic setup of the film resembles Ramayana but only in an inverted way as this time around, Kauravas are the rightful ones and Krishna stands on their side. This surely is an interesting subject. But the director takes a formulaic approach to narrate the story with a commercial template. Nevertheless, the film has enough scenes which will strike a chord with the galleries and that is one of its main assets. The director Bakkiyaraj makes his intentions clear right from the word go. He narrates the story with a commercial touch. But it needs to be said that he could have upped the novelty factor a tad to make the film even more engaging.

The movie unit has been promoting Sulthan as a proper mass masala entertainer and the film is true to its tag. The film is laced with action, romance and comedy, making it a wholesome watch this summer. But the screenplay is patchy and a section of audience might find it formulaic and outdated.

Watch or Not: Those who love mass movies will enjoy it

Sulthan is a 2021 action thriller film, written and directed by Bakkiyaraj Kannan, and produced by S. R. Prakash Babu and S. R. Prabhu under the banner Dream Warrior Pictures. The film stars Karthi and Rashmika Mandanna, the latter’s debut in Tamil cinema.

Second half report: The makers balanced it with some emotional scenes and action episodes, making it high on commercial aspects.

11.30 A.M: The film ends with a fight scene, where Karth’s gang returns to the village and joins the hero in the fight against the villain.

11.10 A.M: After the death of Mansoor, Karthi’s gang, who mistook the hero, leaves the village. These emotional scenes are shot well.

10.45 A.M: Karthi’s uncle Mansoor dies in the attack by villains, and the emotional scene here is quite connecting.

10.30 A.M: Villain plans an attack on Karthi, and the fight scene caught the audience’ attention.

10.15 A.M: The second half starts with Karthi taking an appreciating decision to begin farming in the villain’s village. However, he faces some challenges to accomplish it.

First-half report: The gripping story engages the audience. The first half is good commercially, and the fight scene in the interval is shot very well.

10.00 A.M: As the situation forces him, Karthi decides to lock horns with the antagonist.

09.45 A.M: Here comes the female lead Rashmika Mandanna entry with a Pelli Choopulu episode. Karthi fell for her, but she rejects him.

09.35 A.M: To change his people, Karthi stays in the village, leaving behind his major goal.

09.30 A.M: The police department sets a deadline for Karthi to make his people leave the violence.

09.22 A.M: A tragedy strikes in Karthi’s family and he finds the people who attacked his house.

09.15 A.M: An emotional scene in the hospital touches Karthi, and he decides to lead everyone to peace.

09.10 A.M: Karthi’s father inks a deal with Amaravati farmers to save them from the antagonist. KGF fame Ramachandra Raju is introduced as the villain.

08.50 A.M: The movie opens with the opposite gang attacking the protagonist’s house. Karthi, who born on the same day, has been named Sulthan.