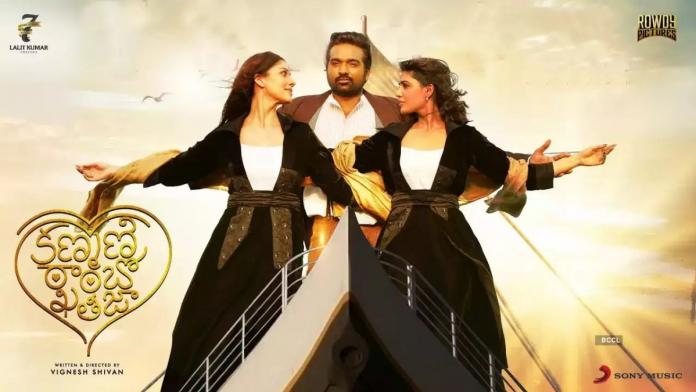 Kollywood movie Kaathu Vaakula Rendu Kadhal starring Vijay Sethupathi, Nayanthara and Samantha in the lead roles is dubbed in Telugu as Kanmani Rambo Khatija and had a simultaneous release today. Let’s analyse it.

Kanmani Rambo Khatija is a triangle love story between the lead cast( roles played by Vijay Sethupathi, Nayanthara and Samantha). How will Rambo cross paths with Kanmani and Khatija? What kind of peculiar incidents happen between the trio when they decide to stay together at one play? How the relationship between the trio end up? To know that, you have to watch the film in the nearest theatres.

The lead actors Vijay Sethupathi, Nayanthara and Samantha did their roles quite convincingly.

While Vijay Sethupathi did the role of a guy who is in love with two ladies with so much ease, Nayan and Samantha brought life to a couple of combination scenes with their amazing screen presence.

Other artists who did supporting characters are okay in their respective roles. Two kids who played as Nayanthara’s siblings are cute on screen and gave a good performance.

Music by Anirudh Ravichander is good as his background score elevates a couple of key scenes nicely. All the songs are situational and are passable on the screen.

The cinematography by SR Kathir is fine as he presented the entire film on a colourful note. Editing by A Sreekar Prasad is adequate as a couple of slow-paced scenes in the first half could have been chopped off.

Vignesh Shivan is the direction for this rom-com drama. Though Vignesh concept based on a triangle love story is ages old, he tried to present the film on a decent note with his style of treatment. But the main minus for the film is its slow paced proceedings in the first half. If Vignesh would have worked on writing a gripping scene order, the result would have been even better.

In an overview, Kanmani Rambo Khatija is a rom-com entertainer that has a few fun and decent moments in the second half. But the pace of the film and not so gripping presentation comes an minus for the film. All we suggest is to watch the film in the theatre if you have enough time and money or else skip the theatrical watch and wait for an OTT watch.

In an appreciable act, the British Deputy High Commissioner, Gareth Wynn Owen has donated blood at Chiranjeevi blood bank a short while ago. Chiranjeevi himself...
Read more
Movie News

Senior producers Suresh Babu, Allu Aravind, and others took part in the latest episode of Unstoppable and they had many interesting statements to make. Particularly,...
Read more
Movie News

Young and promising hero Aadi Saikumar is coming up with yet another intriguing project Top Gear being directed by K Shashikanth. The film’s promotions...
Read more
Movie News

One of the acclaimed filmmakers of India, SS Rajamouli has bagged a prestigious award at the international awards circuit. The RRR director, who received...
Read more

In an appreciable act, the British Deputy High Commissioner, Gareth Wynn Owen has donated blood at Chiranjeevi blood bank a short while ago. Chiranjeevi himself...
Read more
Photo Gallery

Senior producers Suresh Babu, Allu Aravind, and others took part in the latest episode of Unstoppable and they had many interesting statements to make. Particularly,...
Read more