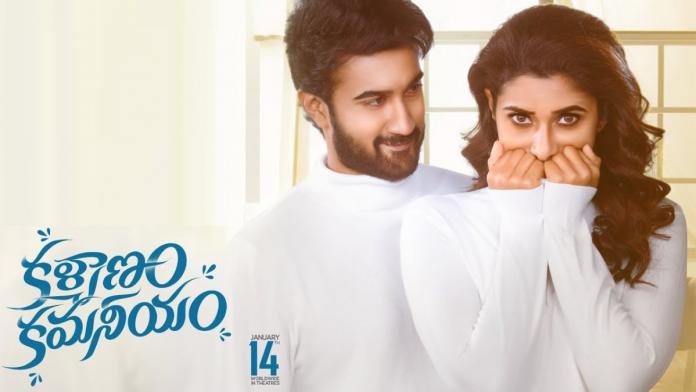 Santosh Shoban is one of the most promising upcoming actors in the industry. He is being seen in back to back movies, and has now come up with Kalyanam Kamaneeyam. The film is the third Telugu release for this Sankranthi season, and there have been decent expectations on the film. Let’s see how the film has turned out to be upon release.

The story is about Shiva, who is smart and a guy with good skills and talents. However, Shiva never puts in any efforts to get a job or be financially successful. He turns out to be lucky when he gets married to Shruti, who doesn’t mind that Shiva doesn’t work, and takes on the financial responsibility of the house completely. When everything seems to be going on well, Shruti changes and misunderstandings increase between Shiva and her. Why is that, and what happens in the end forms the rest of the story.

Santosh, as always, is wonderful in his character. However, the actor doesn’t get anything new to do here. It’s a role that he’s already been seen in, and a character that’s already been seen countless times in Telugu cinema. Nevertheless, Santosh gives a very earnest performance.

Priya Bhavani Shankar is good in her role, and does the needful well enough. This is surely a very good debut for the actress.

The rest of the supporting cast are also good in their roles, and contribute as much as is required, to the story.

Director Anil Kumar Alla has certainly come up with a very good concept. While he didn’t deviate from the concept much, he also didn’t execute in an entertaining way. The director’s attempt is very honest, to be sure, but one can’t help but feel like there’s something missing at the core of the film. He should have also been mindful of the runtime, which feels too long for the story that he chose to tell. The characters are good, but they aren’t shown or developed properly. The climax feels rushed, and there’s no solid conflict point in the movie. Not much importance is given into how Shiva and Shruti first began their relationship, which turns out to be a problem in the second half, as the audience can’t really connect to the problems faced by the couple.

The music by Shravan Bharadwaj is melodious, and the background score is good enough, blending with the scenes. The cinematography by Karthik Ghattamaneni is very beautiful.

The production design is good, but the editing could have been much better.

Verdict: On the whole, while Kalyanam Kamaneeyam is a very honest attempt, it leaves the viewers feeling underwhelmed. The film is not something that warrants a theatrical experience and can be happily watched when it releases on OTT.