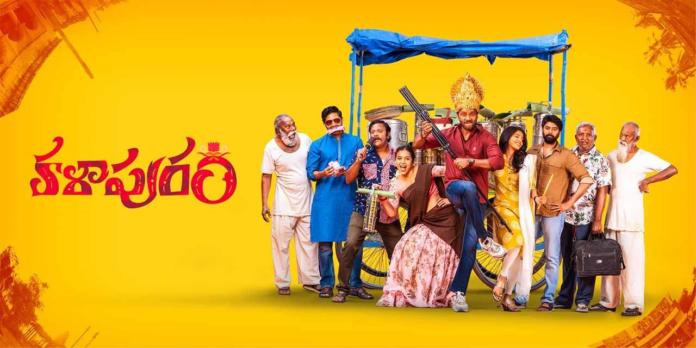 Director Karuna Kumar’s movie, Kalapuram has hit the screens. Let’s see how it is.

Kumar( Satyam Rajesh) an aspiring film director lands in a remote village named Kalapuram due to some unforeseen circumstances. As election code is in existence in the area, Kumar and his friend will struck in the village for one month. During this time Kumar makes a low grade film utilising the properties in and around Kalapuram. Without any intimation to Kumar, the film producer releases the film which gets blockbuster talk from morning show itself. How will the film releases smoothly? Who is the main head behind the planning and execution of the movie? To know that you have to watch the film in the nearest theaters.

Satya Rajesh impresses with his honest acting in the lead role. His acting as an aspiring director brings depth to the proceedings to an extent.

Chitram Seenu is okay with his performance in an extended cameo role.

Rest of the artists such as Sanchitha Poonacha, Kaashima Rafi, Praveen Yandamuri did their supporting roles decently.

Director Karuna Kumar idea of exploring the struggles in the film making is good but Kalapuram often remains us of Ram Gopal Varma’s film, Katha Screenplay Darsakatvam Appalaraju which also has a similar concept.

The editing work by SB Raju Talari is fine. The cinematography work is nice as the rural atmosphere captured well. Music department fails as none of the songs or the background score registers.

In an overview, Kalapuram is a low grade film winded up with no proper presentation and scene order. The cliched and unconvincing execution stall tall as a demerit for the movie.