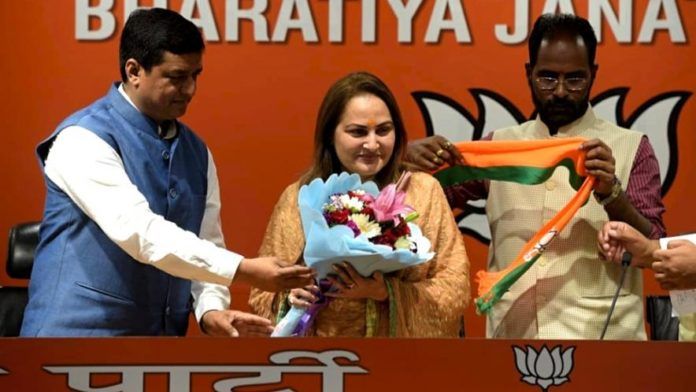 She may enter the electoral fray to challenge her erstwhile party colleague and Samajwad Party’s heavyweight Azam Khan from Rampur constituency in Uttar Pradesh.  She had represented Rampur twice in the Lok Sabha – in 2004 and 2009 – as member of Samajwad Party.

Jayaprada described joining the BJP today as ‘historic moment’ in her life.  “Today, I become party of a national party, where the leader leads from the front to protect the national security and integrity,” she said.

“Whether it is films or politics, I have always worked with everything I have,” she claimed.

The veteran actor had taken a plunge into active politics way back in 1994 as member of the Telugu Desam Party, which was spearheaded by legend N T Ramarao.  However, she left the party after having serious difference with Nara Chandrababu Naidu and joind the Samajwad Party, at the initiative of Amar Singh.

She and Amar Singh, in fact worked closely associated to strengthen the SP, till they were expelled fro the party. Both of them joined the Rashtriya Lok Dal ahead of the 2014 general elections.