More
Home Political News Interesting poster with Jagan, PK and Vijay in between?! 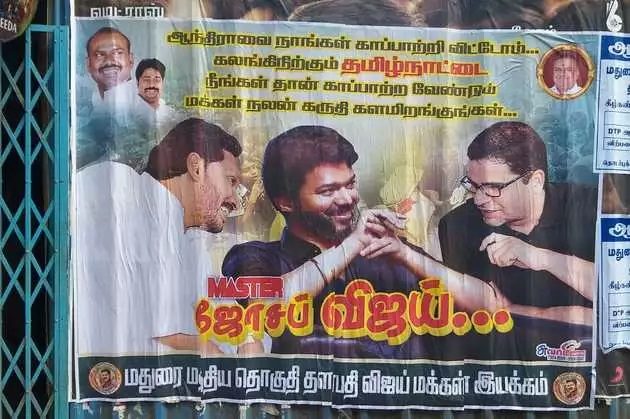 Well, we did not see this coming. Not at all. Chief Minister Jagan Mohan Reddy on one side, political strategist Prashant Kishore on another side and there in between stands Tamil Super Star Vijay. This poster has created huge curiosity when it appeared in Tamil Nadu overnight. It has given rise to political discussions.

The poster reads as “we have saved Andhra, so you too must save Tamil Nadu and India”. These posters were released in the name Joseph Vijay Imam Commander Vijay People’s Movement.

These posters have appeared first in Madhurai city of Tamil Nadu. According to the sources, this was an act by hero Vijay’s fans. This is even becoming viral in social media. A new slogan of save Tamil Nadu was started. They say that Andhra Pradesh people had saved themselves by electing Jagan Mohan Reddy as their Chief Minister.

It looks like Vijay’s fans are indirectly asking him to get into politics. Analysts say that due to the IT raids that took place on Vijay could be the reason for this movement. They feel that their hero Vijay was targeted by BJP. The fans have even got into fights with BJP members.

But PK’s picture in the poster creates additional curiosity as DMK party already requested him to work for their party in the upcoming Assembly Elections in 2021. According to the sources, even PK has given a green signal. Vijay’s fan targeting PK is somewhat interesting.