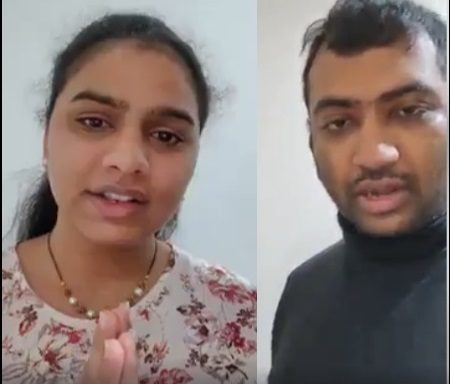 Hyderabad couple who made it to the trending with some serious allegations on Banjara Hills policemen have taken a shocking U-turn all of a sudden.

Atluri Suresh and Pravija released a video on social media in which they alleged that Banjara Hills police harassed them when they had gone to file a complaint. Pravija alleged that she was sexually assaulted and her husband was badmouthed by the police. As the couple claimed that they have all the required evidence, even the netizens spoke in support of them with the numerous positive comments under the viral video.

But Banjara Hills police denied the allegations and also challenged the couple to prove those or else asked to face the law. Now all of a sudden, the couple released another video apologizing for making false allegations.

At a point of time when the society is joining hands together to protect women from all the odds (Eg: Disha’s case), it is unfortunate to know that a woman like Pravija making false sexual allegations.