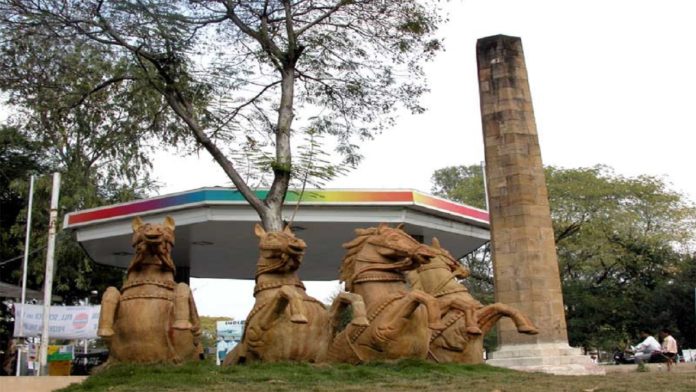 Have you ever thought of finding the central point of India, in terms of geography? It is in Nagpur and the place is named as Zero Mile Stone. The statues of four horses and a sandstone pillar, mark the spot.

Constructed during the time of the Raj, the British used the spot as a point to measure the distance of several states. The Zero Mile Stone is located to the southeast of the Vidhan Bhavan building, the distances to some significant places from the spot have been engraved on the monument.

During the British period, when India was divided into different provinces, Nagpur was identified as the Centre and was also the capital of the Central Provinces and Berar. When the states were formed, Nagpur then became a part of Maharashtra and thus given the status of the state’s second capital.

While the vertical face of the monument’s pillar reads G.T.S STANDARD BENCH MARK. 1907, the horizontal stone reads “The height of the top of this pillar is 1020.171 feet above the mean level of the sea.”

The Survey of India, an agency in charge of mapping and surveying, has carried out a project called Great Trigonometrical Survey (G.T.S) in the 19th century. A GTS benchmark refers to the fixed reference points with a known elevation above the mean sea level.

A few raise doubts on whether the geographical specifications, the monument is claiming are true or not. Reportedly, after the partition of undivided India into India and Pakistan, the country’s centre has been shifted from Nagpur to a small village called Karaundi in Madhya Pradesh, located about 40 km from Sihora in Jabalpur district.