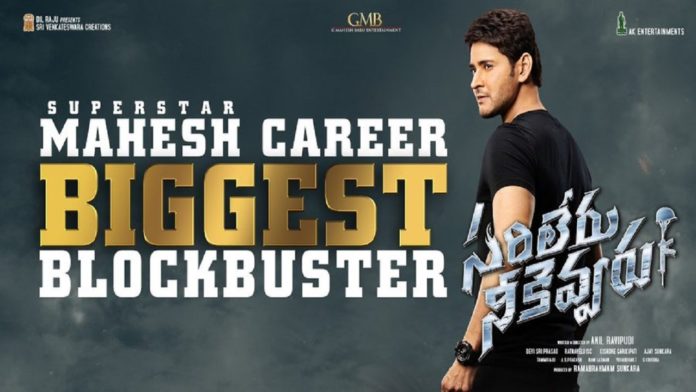 Super Star Mahesh Babu’s 26th flick Sarileru Neekevvaru which was released recently on the eve of Sankranthi turned out to be a smashing hit. The film went onto become the biggest hit in the career of Mahesh Babu. In the Telugu States alone, the film has collected more than 100 Crores share which is a phenomenal achievement. Super Star played the role of major Ajay Krishna in the movie. Mahesh’s comedy timing, stunts and dances are liked by fans and the director is commended for making this possible.

The film is still having a run in decent amount of theaters. According to the latest update makers of Sarileru Neekevvaru have decided to hold on to a grand 50 days celebrations amidst fans, distributors of the movie and of course movie unit. Exact date and venue are yet to be finalized but the decision to hold an event is taken. It has become rarity these days to conduct 50 days functions but Sarileru Neekevvaru has achieved that.

Mahesh Babu has finished his holiday trip and is back in the city. He will be starting his next project in the direction of Vamsi Paidipally only in Summer. The Super Star is also in talks with few directors for his next couple of films.