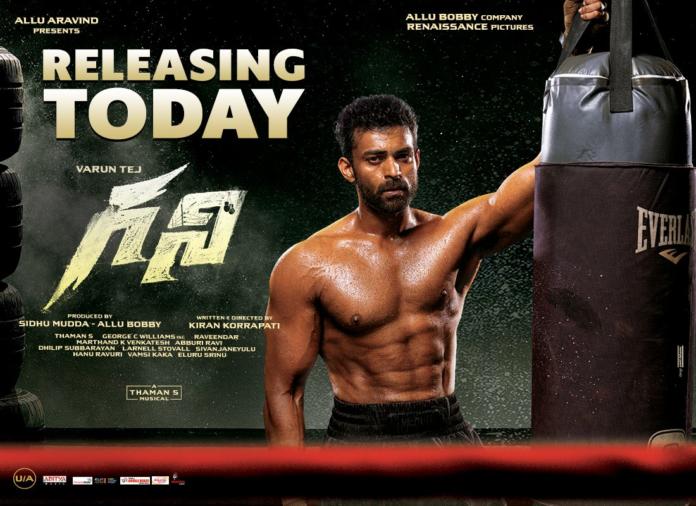 Varun Tej’s boxing drama Ghani has hit the silver screens today. The film had to be postponed multiple times in the past and it has finally seen daylight now. It is promoted as an authentic sports drama. Let’s see what it has in store for the viewers.

Story: Ghani’s (Varun Tej) dad Vikram Aditya (Upendra) is a state-level boxing Champ. He gets cheated by his coach Eshwar Nath (Jagapathi Babu) in his final boxing match and gets a bad reputation of taking steroids. Ghani wants to become a Boxing champ and earn good reputation, unlike his father by going against the wish of his mother (Nadiya). The rest of the story is all about how he comes to know the truth from his Dad’s final match opponent (Sunil Shetty) and takes revenge on Eshwar Nath with his help

What about onscreen performances?

Varun Tej excels in the role of a boxer. All his hard work and dedication are clearly evident. He has undergone a very impressive transformation and he emoted well too. Veterans like Upendra, Sunil Shetty, Nadiya, and Jagapathi Babu bagged decent roles and they did justice to their roles. Naveen Chandra is adequate and Saiee Manjrekar as Varun’s love interest has got a short role but she emoted well.

What about offscreen talents?

Thaman’s background score is one of the key assets to the film. His audio album is just about okayish, but his soundtrack is good. The cinematography is of elite quality and the boxing ring scenes are captured well too. The production values are very good. The director Kiran Korrapati has made his directorial debut by picking a sports revenge drama and he did a decent job by not deviating from the crux of the film in 2nd half.

Verdict: Director, Producers and Lead actor should be commended for doing a clean sports revenge film, a genre that is not usually touched by many. Movie opens slow and builds up some pace before Interval. The second half again starts slow but picks up pace with some drama and emotions and falls flat towards the climax. At times, the movie becomes very predictable. Finally, Ghani is an okayish watch for sports movie lovers, but may not offer a great punch for others.