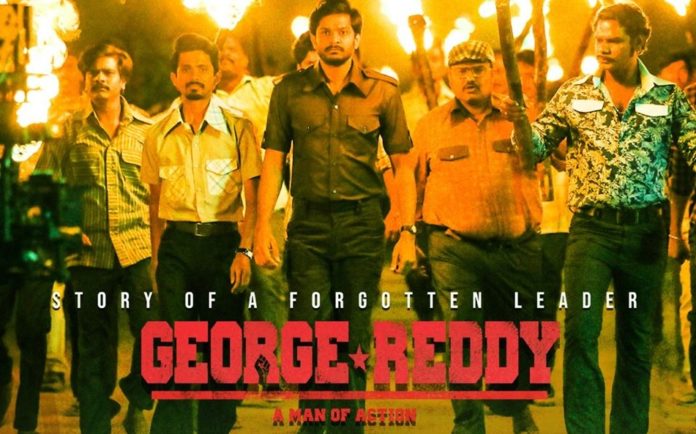 George Reddy (Sandeep Madhav) comes to Osmania University, to pursue post graduation. But after witnessing the discrimination between rich and poor, castes and such, he decides to fight against the issues. In this process, he goes against Satya (Satyadev) and Kaushik (Chaitanya Krishna), the existing student leaders. What are the consequences, he faced from them and how did he tackle all such issues, is what shows George Reddy.

No second thought about Sandeep Madhav. He did a brilliant job as George Reddy. His intensity, and the way he carried the character and his body language is quite impressive. Satya Dev and Chaitanya Krishna, who played prominent roles in the film, also did a decent job.

The entire first half is a thorough entertainer, with several notable episodes. George’s childhood character, elevation scenes and several such episodes make it an instant winner.

Sandeep’s introduction scene, canteen scene showing the discrimination, a fight sequence in fire background and interval block are the major highlights of the first half. Coming to second half, rain fight with blades is an attractive one.

Unlike cut to cut scenes, where there would be the chances of missing the emotion, the makers opted for the continuity in scenes, which gave a fresh approach. So the cinematography can be considered as top notch. Sudhakar Reddy Yakkanti, who earlier worked for the technically strong films like Sairat worked for George Reddy. He elevated several scenes in the film, with his mind blowing approach.

Background score needs a special mention, as there are several scenes that have gone to the next level, due to the stupendous BGMs. Especially, in the first half, the timely BGMs n the heroic scenes would act as a feast to the mass lovers. Even in the second half, BGMs in parts are good and again in the climax emotional part, the background score will be impressive. The set work is also good.

Coming to the negative points, as George Reddy is a biopic, one would expect it to explain a complete life of the student leader. But the makers took only a few parts and tried to focus on the same. Though they tried to specify other points through the dialogues, it still appears incomplete at the end, thus leaving the audience dissatisfied.

Adding to it, just 15 minutes after the beginning of second half, especially from the rain fight, the film drops and moves slow. The racy screenplay till then, takes a sudden halt and continues the same, throughout the second half.

They tried to focus on mother sentiment to some extent, but failed to make any notable impact. The bonding between the mother and son could have been established better. Even the love story, which is anyway fictional is not handled well.

Much to the disappointment, the director ignored explaining about George Reddy’s ideology, which is one of the major minus points of the film. As the audience lose connectivity with George’s thoughts, whatever he does on screen, does not catch the attention of many.

Pre climax scene and emotional climax, which is expected to be the heart of any film, surprisingly acts as an average stuff in George Reddy. When the film established him in such a heroic manner in the first half, his death scenes will be expected to have a huge emotion. But the director explained it just two shots and took an end, thus making the audience feel that it had an abrupt or incomplete ending.

As the makers only picked few elements in the life of George Reddy, audience, who are keen to know the complete life of the student leader may get disappointed. The same attempt also disconnects audience from the film. But the film still has a long way to go. Right from the beginning, George Reddy had a good anticipation.

As the film has a notable content too, it is expected to witness some magical collections. After Diwali, it is going to be a good notable success among small films. The film is majorly aimed at youth audience, with several goosebumps moments. As the emotions lack, how far will the family audience enjoy the film is a question.

Natural Star Nani's second production venture Hit is one day away from release. The movie which is a crime action thriller has set good...
Read more
Movie News

The ruling party YSRCP and the Janasenan are constantly at each other's neck all the time. Especially since the time Pawan Kalyan had become...
Read more