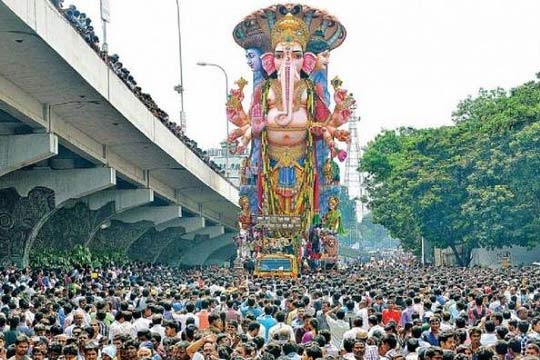 The Ganesh immersion is underway across Telangana, with a mammoth procession in Hyderabad amid tight security on Thursday. Over 50000 idols, the majority of them in Hyderabad and nearby places are being immersed in Hussain Sagar and other key water bodies across the city.

The process of immersion is likely to be continued till Friday afternoon, as the number of idols across the state is huge this year. Thousands of people gathered at the Hussain Sagar to watch the “Shobha Yatra”.

The popular Balapur Laddu was sold for Rs. 17.60 lakh this year and later the main procession began from Balapur itself. On the other side, Khairathabad Ganesh that is 61-feet-tall, this year was the first to begin its journey. It took 4 hours to cover the distance of 1.5 km. The onlookers were thrilled by the giant size of the idol and were seen clicking the pictures throughout.

As there are traffic restrictions in several parts of the city, the authorities have declared it as a general holiday. The restrictions will continue to remain till Friday afternoon.