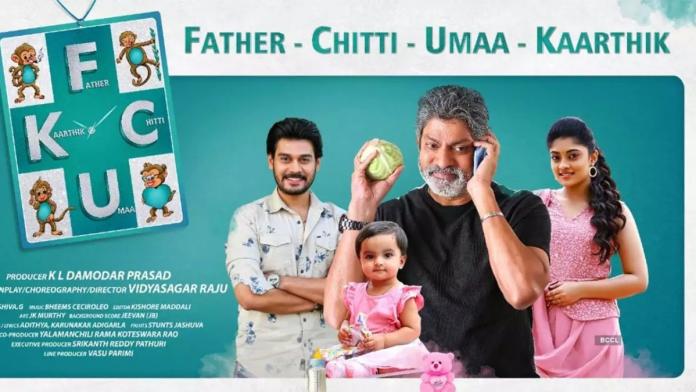 As the name suggests, FCUK – Father Chitti Uma Karthik is billed to be an adult comedy, starring Jagapathi Babu, Ram Karthik, Ammu Abhirami, and child artist Sahrashitha in the lead roles. The film hit the big screens today and here is what we had to say after watching it.

Phani Bhupal(Jagapathi Babu) is a middle-aged playboy who makes a living from selling condoms. However, his son Karthik(Ram Karthik) has a completely contrasting character and he is more of a dignified lad. One random day, Karthik sees Uma(Abhirami) and falls in love with her almost instantly. He comes to know that Uma is already engaged but tries to woo her before she ties the knot. Incidentally, havoc caused by Bhupal results in Uma hating Karthik. Soon after, Bhupal meets with an accident and he is found with a small girl named Chitti by his side. How is this girl related to Bhupal? How does she affect the lives of Bhupal, Karthik, and Uma? The answers to these questions form the core plot.

Jagapathi Babu as a middle aged playboy is splendid. His portrayal of the character, styling, salt & pepper looks, and mannerisms are bang on point. Ram Karthik plays a happy-go-lucky lad and he looks settled. Ammu Abhirami who is a known face on Kollywood is making her Tollywood debut with the film and she is a performer. Her cute expressions will attract the youth. Master Bharath and Ram Prasad play comical roles but they do not provide much comic relief.

The music composers Bheem’s Ceciroleo and Jeevan score cent marks. Bheem’s songs are very good and so is Jeevan’s background score. G Siva’s cinematography is pleasing to the eyes. He carries the mood of the film with his brilliant work behind the lens. Editing should have been better as a chunk of the film could have been chopped off to keep the run-time crisp.

Vidyasagar Raju’s storyline has a good premise and packs some excitement, but his lacklustre narration and screenplay play spoilsport. He takes a formulaic approach to narrate the bold point and that works against the cause. Every other scene in the film can be easily predicted and that takes a toll on the watching experience. The director does succeed in getting the best output from his technical crew and lead cast but he fails to present his story in the right manner, owing to poor writing.

FCUK was accredited an A certificate and one would expect it to be a bold film with an engaging story, given the star cast. But the Jagapathi starrer fails to keep the audience hooked and its boring screenplay and narration are to be blamed. There is a hint of adult content here and there but the film simply does not have what it takes to make for an interesting watch.

Watch or Not: You can comfortably skip watching this film.

We know Coronavirus is a deadly disease that makes people stay away from the infected as it is contagious. Despite fearing for it, the...
Read more
Movie News

The sudden demise of Popular actor Vivek has left fans and the film fraternity shocked. The versatile actor passed away on Saturday after suffering...
Read more
Movie News

In March this year Ajay Devgn took to his online media profile sharing an enigmatic message wherein he requested that fans and followers call...
Read more

We know Coronavirus is a deadly disease that makes people stay away from the infected as it is contagious. Despite fearing for it, the...
Read more
Photo Gallery

The sudden demise of Popular actor Vivek has left fans and the film fraternity shocked. The versatile actor passed away on Saturday after suffering...
Read more
Photo Gallery

It is known that Pawan Kalyan tested positive for Covid yesterday. Reportedly, Pawan Kalyan has a light congestion in his lungs and he is...
Read more