Enugu Review: Strictly for some action 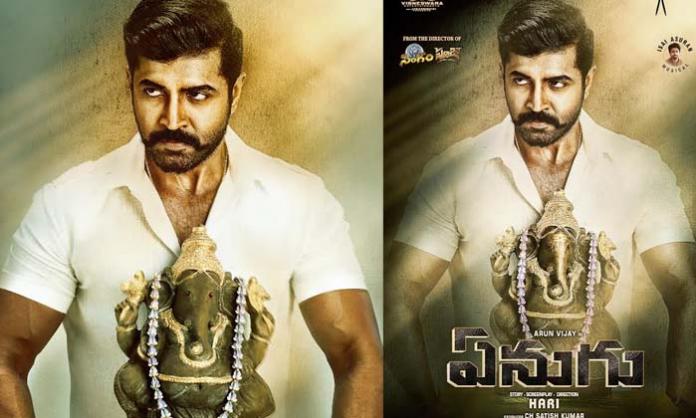 Tamil actor Arun Vijay’s new film, Yaanai under the direction of Hari had a simultaneous release in Telugu as Enugu on July 1st. Let’s analyse it.

Being a protective person Ravi( Arjun Vijay) keeps safeguarding his joint family from rivalry gang. Ravi is the last child in the family that has three big brothers. The entire film runs on the disputes between the family members. Who is the reason behind distrubance in the joint family? How will Ravi sort out all the issues in the family and reunions it, forms the crucial crux of the film.

Arun Vijay did the given massy role with so much ease. His intense acting and the makeover as a small town person brings depth to the proceedings to an extent.

Samuthirakani gets a purposeful role as the elder brother and did his part quite effectively. Actors who are seen in middle brother roles are okay with their performance. KGF fame Ramachandra Raju did his negative shaded character quite effectively.

Female artists such as Ammu Abhirami, Radhikaa Sarathkumar, Priya Bhavani Shankar among others did their key roles quite convincingly. Yogi Babu ‘s comic dialogues come as a relaxation for this serious drama.

While the cinematography work by S Gopinath elevates the mood for this rural drama nicely, the music by GV Prakash decent. Two emotional situational songs which come at the crucial juncture are incorporated nicely in the proceedings, the background score elevates all key action blocks.

The editing work by Anthony is alright as he made sure that the film has runtime within limits. Production values for this limited budget movie are okay.

Coming to the direction part, though Hari’s idea of making an action drama by incorporating enough family emotions in it good, he would have worked even more on the script and focus on the narrative part.

In an overview, Enugu is a predictable action drama that has a few family related hard-hitting emotions sequences. On the flip side, the beaten to death storyline and lack of unique approach dilutes the audience interest.

It appears like fans have started a trend in Tollywood to re-release the iconic movies of their favourite actors to celebrate the stars' birthdays. After...
Read more
Movie News

For the past few weeks, there have been speculations that Kollywood star Vijay Sethupathi is playing the antagonist in Allu Arjun's upcoming film 'Pushpa:...
Read more
Movie News

Tamannaah comes on board for Rajinikanth’s Jailer?

We all know that Superstar Rajinikanth has joined hands with director Nelson Dilipkumar for the 169th film, which is titled Jailer. The shooting of...
Read more
Movie News

ZEE5, which has been dishing out a wide variety of content in various languages, has recently come up with yet another interesting web series...
Read more

Mood Of The Nation: Majority of voters are with YSRCP

Andhra Pradesh Chief Minister YS Jagan Mohan Reddy is still ahead of his opposition leaders as far as his popularity is concerned. There are...
Read more
Political News

YS Sunitha Reddy approached the Supreme Court regarding the murder case of her father and former minister YS Vivekananda Reddy. In her petition, she...
Read more
Political News

When Nara Chandrababu Naidu was the Chief Minsiter of Andhra Pradesh, he laid down several plans for the development of Amaravati as a world-class...
Read more
Political News

Jagan to have a detailed discussion with the PM!

It appears like fans have started a trend in Tollywood to re-release the iconic movies of their favourite actors to celebrate the stars' birthdays. After...
Read more
General News

Veteran investor Rakesh Jhunjhunwala, referred to as India's own Warren Buffett, passed away on Sunday morning. He was 62. According to reports, Mr Jhunjhunwala was...
Read more
Movie News

For the past few weeks, there have been speculations that Kollywood star Vijay Sethupathi is playing the antagonist in Allu Arjun's upcoming film 'Pushpa:...
Read more
Sports

New Zealand's former star batter Ross Taylor made revealed a shocking incident where one of the owners of Rajasthan Royals had slapped him across...
Read more