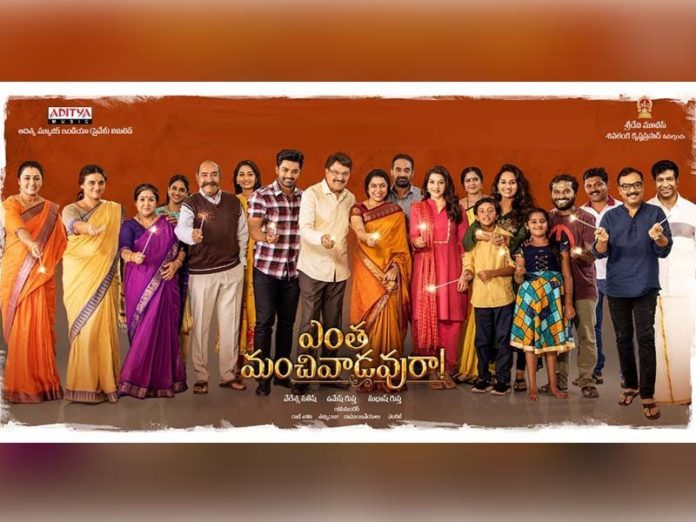 Balu (Kalyan Ram) is an orphan. Knowing the value of relationships, he starts a company All is Well Relatives Supplier. He becomes brother in one family, son in other, grandson for another. While this is going fine, he comes to act as Tanikella Bharani’s son. There he faces some unusual circumstances. He gets involved in a tussle with local sand mafia kingpin Ganga Raju (Rajeev Kanakala). On one occasion, Ganga Raju takes an oath to kill Balu at any cost. What happened to him? What happened to his company?

Nandamuri Kalyan Ram has done a decent job in this film. He tried hard to carry the film on his shoulders. There are lot of sentimental scenes in the movie and tried his best. He looked class and stylish. Mehreen Kaur is a total waste. She has no expressions in her face. Vennela Kishore is the only saving grace in the movie. Nellore Sudarshan is Okay. Rajiv Kanakala with the talent he possess could have done a better job. Talented artists like Tanikella Bharani, Suhasini, Sharath Babu, Vijay Kumar are wasted in this life less script.

Surprisingly Gopi Sundar who generally gives out good music, fails big time with Entha Manchivadavura album. Not even one song registers in your mind. Back ground music is repetitive. Editor Thammiraju could have done a better job.

Satish Vegesna has taken the theme line from the film Oxygen. However the way it is presented in Entha Manchivadavura will not impress. Audiences couldn’t connect to the concept which in turn brings out sentimental scenes as a boring affair.

Satish Vegesna is a national award-winning director with the film Shatamanam Bhavati. Though his last film Srinivasa Kalyanam is a flop, everyone expected Entha Manchivadavura to be a better film. But unfortunately, the film’s concept hasn’t been dealt well. Pace of the film is a big complaint and the overdosage of sentiment scenes couldn’t help the proceedings either. Entha Manchivadavura brings the feeling that serials are a lot better in terms of sentiment. Complete bore fest.

Watch or Not?: Watch at your own risk. Better not.

Box Office Status: Though Sankranthi season might help to bring in openings. Entha Manchivadavura has very little to support for a box office hit.

10:30 AM: ‘Entha Manchivadavura’ Second half report:

Second half is very slow and will remind us of serial from point to point. Few emotional scenes though not on a promising note are better compared to other scenes. Vennela Kishore comedy is a bit relief. Again climax gets bogged down. Check out our review within a short time.

10:20 AM: Serial kind of sentiment scenes brings the movie to an end

10:15 AM: Movie reaches climax with Ganga Raju coming out of jail and attacks Balu who arranges a get together with all his relatives

10:10 AM: Vennela Kishore understands the love between Kalyan Ram and Mehreen.

10:00 AM: Director is trying hard to make audience laugh but could only succeed to some extent

09:55 AM: A new twist in the tale. Sharath Babu and Suhasini makes their entry

09:47 AM: Finally some relief from sentiment scenes as Vennela Kishore makes his entry. He wants to marry the heroine and some laughs.

09:42 AM: Heavy dosage of sentiment scenes are on now. Sad twist to Balu. Meanwhile, Ganga raju in jail takes an oath to kill Balu

09:36 AM: Post interval, Bharani comes to know the twist. Though he gets upset first and warns not to play with the emotions. The scene is quite emotional.

09:30 AM: ‘Entha Manchivaadavura’ First half report:

Entha Manchivadavura falls flat in the first half with boring scenes all over. Concept itself is not convincing and the scenes are repetitive. We have to wait and see for the second half if it can turn the tables on.

09:25 AM: A fight scene is on now and Balu makes Gangaraju go to jail

09:22 AM: Gangaraju wants a signature from Balaraju who is once a village officer on land

09:19 AM: Idream TNR is side kick to Rajiv Kanakala. His expressions are flat asusual.

09:15 AM: Rajiv Kanakala enters the scene as Ganga Raju who is local sand mafia king pin. He tried something different but somehow didn’t worked

09:10 AM: Tanikella Bharani makes his entry as Rama Sharma. He is suffering with Cancer. His wife asks emotional suppliers to act some one as their son and Kalyan Ram comes as their son

09:03 AM: More scenes are on with Kalyan Ram arranging relations who are in need.

08:58 AM: Emotional relatives concept is not working on-screen.

08:53 AM: Balu starts a company called All Is Well Emotions Suppliers Company. He supplies family members and relatives like Father, Son, Mother etc.,

08:50 AM: Since Balu is an orphan. He helps people by being close to them as a family member.

08:48 AM: He is helping out people who is in need of relation. Balu helps another person whose brother dies in military. He visits this family every 6 months

08:45 AM: Kalyan Ram’s character is getting revealed now. He acts as a Grand child to Vijay Kumar.

08:42 AM: Kalyan Ram now has another name Rishi. He is now a brother to a girl. He has now names of Siva, Surya, Rishi.

08:37 AM: First song Jaatharo Jaathara song is on. Quite mediocre.

08:35 AM: Wrestling is going on at a village fair. Nothing exciting is happening.

08:30 AM: While at Mehreen he is Balu, but now at the village he goes with the name Surya. He even has a family but Mehreen and his friends think he is an orphan

08:25 AM: Story moves to a village named Mutheswaram which is located near Kotipalli

08:20 AM: Mehreen is a short film producer and she is now producing a short film with Kalyan Ram. He keeps a secret from Mehreen

08:15 AM:Kalyan Ram who is playing the role of Balu loses his parents in his childhood

08:10 AM: Nandamuri Kalyan Ram’s ‘Entha Manchivadavura’ show started. This is the last film in this Sankranthi season.

08:05 AM: Kalyan Ram’s ‘Entha Manchivaadavura’ releasing with clean ‘U’ certificate and Run time locked to 144mins.

Nandamuri Kalyan Ram’s most awaited film of the Sankranthi Season Entha Manchivaaduvuraa is all set to hit the screens on January 15th on the eve of Sankranthi.

The film is directed by Satish Vegesna and stars Mehreen Kaur as the female lead. Touted to be a family – action entertainer, the film’s cinematography is handled by Raj Thota. The film is bankrolled by Shivalenka Krishna Prasad under the banner of Sri Devi Movies. Music is composed by Gopi Sundar.

Entha Manchivaaduvuraa trailer increased the hype surrounding the film. For the first time, Satish Vegesna showcased the mass elements through this film. Well, let us wait and see what’s in store for all of us from Kalyan Ram & Satish Vegesna.

Pooja Hegde needs no introduction to movie buffs. Butta Bomma stood out as one of the leading actresses in the South film industry by...
Read more
Movie News

The sixth season of Bigg Boss is into its 13th week, with 8 members left in the house, after Raj got eliminated last week....
Read more
Movie News

Huge update on Pawan Kalyan’s next

Pawan Kalyan had been actively lining up new films with young filmmakers. Here’s a very interesting update on his next film with Sujeeth. This project...
Read more
Movie News

Mahesh Babu back to work

Mahesh Babu had been grieving the passing of his father, superstar Krishna. It was even heard that he hadn’t been talking to outsiders. Cut to...
Read more

Pooja Hegde needs no introduction to movie buffs. Butta Bomma stood out as one of the leading actresses in the South film industry by...
Read more
Movie News

The sixth season of Bigg Boss is into its 13th week, with 8 members left in the house, after Raj got eliminated last week....
Read more
Movie News

Huge update on Pawan Kalyan’s next

Pawan Kalyan had been actively lining up new films with young filmmakers. Here’s a very interesting update on his next film with Sujeeth. This project...
Read more
Movie News

Mahesh Babu back to work