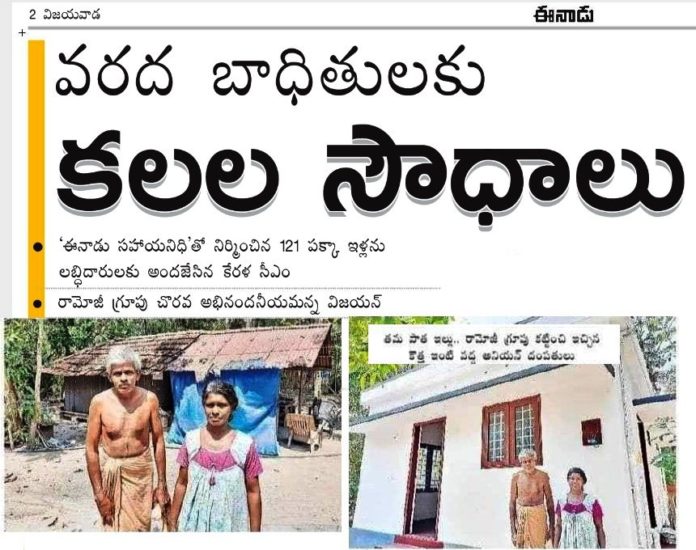 In the wide spectrum of the fourth estate, ‘Journalism’ there is a thing called ‘Photo Journalism’ which is very well known for every reader. One proper picture can explain everything that an essay or content can’t. But, with the advent of social media, there are a lot of morphed pictures surfacing and it seems like a well established and mainstream media house like ‘Eenadu’ adopted this cheap technique.

Coming into the details, yesterday a photo was published in the Eenadu daily which shows a poor couple who lost their own hut being shifted to a new well-built house. At the time of the floods, Eenadu collected donations from people and built 121 houses with 77 crores for the people who lost their homes in the floods which is very much appreciable.

Now, the pictures that are posted in the newspaper brings shame to journalism. Eenadu published the past and present houses of the couple and we can see the poor couple standing in front of both houses. But the interesting thing to observe here is, the couple are wearing the same clothes in both pictures. The old-male wearing a Loincloth and the old-day wearing a nightdress clearly tell us that the pictures were morphed.

This cannot be termed as a coincidence as the expression of the couple in the same pictures are the same in both instances and that too with same clothes. In, June 2007, when CBN conducted a programme where 3 lakh people shifted to guaranteed houses, they did the same. So, Eenadu should bid good bye to this cheap journalism other white they will become the laughter shock of state.