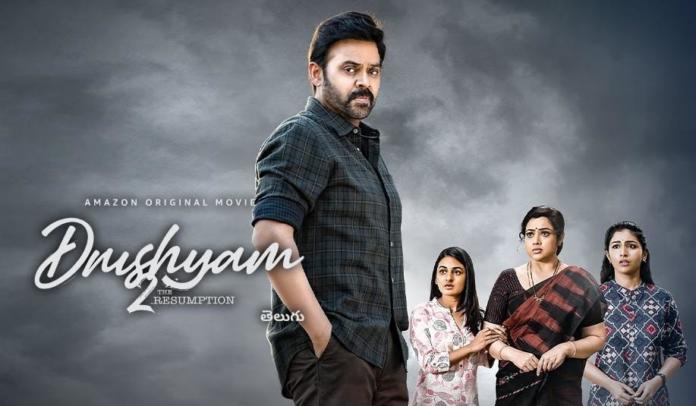 Drushyam 2, the Telugu remake of Malayalam blockbuster Drishyam 2 is streaming on Amazon Prime Video now. The Venkatesh starrer is directed by Jeethu Joseph who had previously helmed the original, Drishyam 2. Let us see what the film has to offer.

Story: Rambabu (Venkatesh) is hell-bent on saving his family from the consequences of murdering a young man. But he and his family has never been so deep in trouble as the police department come at them with all they’ve got. Can Rambabu come up with another master plan and trick the police and also the judiciary system this time around?

Venkatesh is flawless in the central role. He excels as Rambabu, a caring father, and husband who goes to any extent to save his family. Meena has limited screen time and so do the actors who play Venkatesh and Meena’s children. Sampath, Nadiya, and Naresh deliver what is expected of them. The casting is bang on point.

Jeethu Joseph doesn’t experiment around with the script for the remake. It is a mere frame by frame replica of the original. Right from the opening sequence to the very last shot, Drushyam 2 is identical to Drishyam 2. Those who have watched the original might not find the remake as compelling for obvious reasons. Being a talented filmmaker, Jeethu Joseph should have made at least a few cosmetic changes to the script but he doesn’t.

The sequel is a continuation of the first part and it has the right drive. But it takes too long to settle in. The real conflict starts only towards the end. The courtroom scenes are conceived very well. There is an unnecessary lag in the opening half and the opening hour or so is a bore-fest. But the climax is well rounded off and so is the crux plot. For some reason, a few hyped-up scenes that worked very in the original aren’t as effective in the remake.

The background score is flat for most parts, but except for courtroom scenes. The cinematography is of top tier quality and so are the production values. Editing could have been better. There is a lot of lag in the opening half.

Verdict: Drushyam 2 is a faithful remake. The opening half is dull, much like in the original. But the story is well rounded off towards the end. The courtroom scenes are impressive and so is the climax. While those who have watched the original might not find the remake compelling, first time viewers will enjoy a few thrills in the second half. Watch with minimal expectation.

For the past couple of days, we have been hearing that Jr NTR and Mahesh Babu will be attending the grand success meet event...
Read more
Movie News

The makers of Ravi Teja's Ramarao On Duty have announced that a massive update on the project will be out tomorrow. Now, we are exclusively...
Read more

The ruling YSRCP created a huge state of unrest in the state of Andhra Pradesh after Chief Minister YS Jagan Mohan Reddy announced his...
Read more

For the past couple of days, we have been hearing that Jr NTR and Mahesh Babu will be attending the grand success meet event...
Read more
Political News