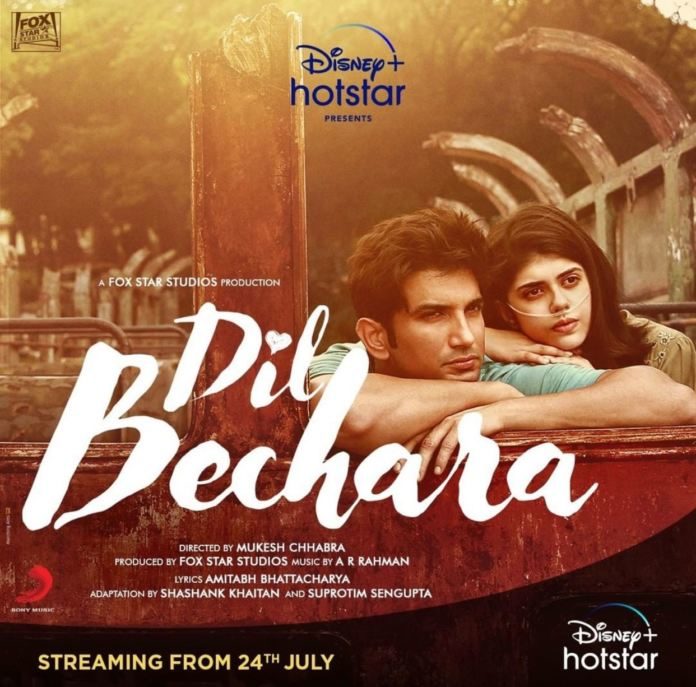 Sushant Singh Rajput’s last film ‘Dil Bechara’ is available for streaming on Hotstar from today. It is an adoption of John Green’s novel ‘The Fault in Our Stars’. Here’s our review of the film.

Immanuel Rajkumar Junior aka Manny(Sushant Singh Rajput) meets Kizie Basu(Sanjana Sanghi), a gril with thyroid cancer and tries to woo her. The duo eventually develops feeling for each other as they enlighten each other’s lives. But a drastic development changes their lives forever. Related proceedings are narrated with a whole lot of emotions.

Sushant Singh Rajput leaves the viewers emotional with a stunning performance in his last film. He shoulders an intense role with utmost ease. He makes you laugh, cry, and feel intense pain. Sadly, this is the last time we get to see him in action and there are no second thoughts in saying that he is one true SUPERSTAR in Indian cinema.

Sanjana Sanghi is very impressive in the role of a girl with thyroid cancer. She emotes very well. She did particularly well in emotional episodes.

Mukesh Chhabra is making his directorial debut with this film and he gets the basics right. He succeeded in extracting the right emotions from the characters. But he should have come up with a more elaborated climax in order to sustain the emotion till the very end.

AR Rahman’s music adds an additional emotional layer to the film. It elevates the vibe of the proceedings. The background score towards the end of the film is splendid.

A couple of patchy sequences

‘Dil Bechara’ is an emotional tribute to Sushant Singh Rajput and there are a couple of occassions when we can relate his role to his off-screen personality. He excelled in his role and so did Sanjana. The journey of the lead pair is a rollercoaster of emotions. The climax feels a bit rushed and a couple of sequences seem incoherent.

Do watch the film for its philosophical storry and even more so, to enjoy the performance of Sushant Singh Rajput for one last time.

We can enjoy his cheerfulness!

We can fee his pain!

We can connect to his emotion!

Dil Bachera – One of the career best performances of #SushanthSinghRajput. As it is the last film of Sushanth Singh Rajput, we decided to not provide rating as we intended to not distrub the beautiful feel of the film.

May your soul rest in peace, Sushanth!

Akhil Akkineni-starrer ‘Most Eligible Bachelor’ opposite Pooja Hegde is prepping up for a theatrical release. Earlier the makers took to Twitter to declare that...
Read more
Movie News

Icon star Allu Arjun has fully recovered from Covid and tested negative for the virus, as confirmed by himself a short while ago. “Hello everyone!...
Read more
Movie News

Rajnikanth has reportedly wrapped up his portion of Annaatthe following a non-stop 35-day schedule in Hyderabad. Rajini’s portion was shot on priority basis, given his...
Read more

The Telangana High Court has expressed outrage over the Telangana government for obstructing the ambulances with corona victims coming for emergency treatment from AP...
Read more

Akhil Akkineni-starrer ‘Most Eligible Bachelor’ opposite Pooja Hegde is prepping up for a theatrical release. Earlier the makers took to Twitter to declare that...
Read more
Movie News

The Telangana state government has announced a lockdown in the state from today. As a result, people flocked to the liquor stores. People did...
Read more