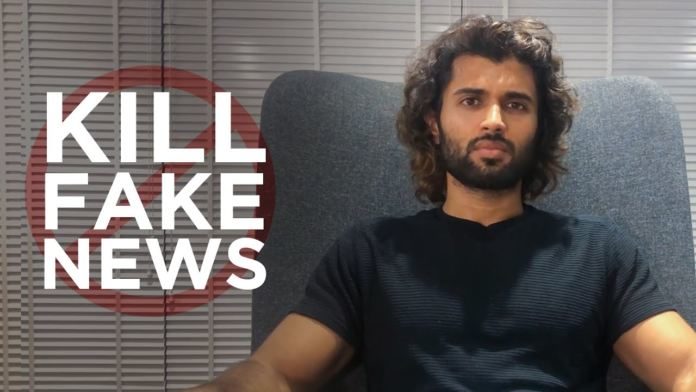 The happening topic in Telugu Film Industry at this moment is #killfakenews. An initiative that took by the young hero Vijay Devarakonda against the senseless writing from some websites who are spreading fake news just for the sake of their view counts and popularity.

Every Telugu hero, director, and producer stood with Vijay in this act and supported his cause for a greater good. Meanwhile, a fresh controversy was lit on the basis of a relatively non-sync incident with the current context.

In 2017, August, Vijay Devarakonda attended a promotional function of a film called ‘Tarajuvvalu’. That is the time when Kathi Mahesh started abusing and degrading Pawan Kalyan and Devarkonda did comment on Katthi Mahesh.

Vijay said that the movie is the only non-controversial thing done by Mahesh Katthi so far and added a punch line that controversies should be death threats but fighting around the bush will do no good to anyone. He neither supported Katthi Mahesh nor criticised Pawan Kalyan.

Now, the Pawan Kalyan fans are showing this video and asking Vijay Devarakonda how can they support him in this #Killfakenews campaign started by him. Along with Devarakonda, they also questioned the fans of other heroes where they were when Pawan Kalyan was deeply criticized and degraded by several mainstream media and paid websites.

Not only Vijay, but no other hero in the TFI also wanted a person like Pawan Kalyan to get degraded by some biased news back then. Now, luckily, everyone took a firm stand against the fake news that is being spread about the lives of cine personalities in their day to day life.

The video in which Vijay commented on Mahesh Katthi is nowhere related to the present context. Vijay was deeply hurt when certain website wrote false news against his little initiative to help middle-class families in this crisis period.

Now if the fans of other heroes who took the past events to their heart question the morality of the supporters of this #killfakenews, this streak of biased and fake news would never break and we would be surrounded by pathetic lies for the rest of our lives.

More ever this will provide another base and required mileage for these venom-spitting-websites to run their houses without any guilt or fear. So, fans should understand the gravity of the situation and join hands with everyone to dispatch this long-lasting garbage.