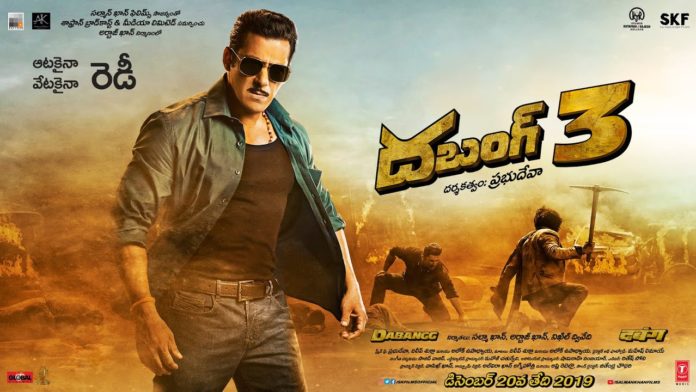 Salman Khan’s Dabangg is a successful franchise and third installment got released today. This time Telugu version has been promoted well too. Let us have a look on how the film could work this time.

Dabangg 3 deals about the story of how an ordinary man becomes Chulbul Pandey. It is more of like a prequel to the Dabanng first part. Chulbul Pandey (Salman Khan) leads a happy life with his own circle. One fine day Pandey’s family decides him to get married to Khushi (Saiee Mukharjee). But Bali Singh (Sudeep) who also loves Khushi is disappointed that she is getting married. So he kills her and put that crime on Chulbul Pandey. After the imprisonement, Chulbul Pandey is raging with vengeance and kills Bali Singh.

Cut to present, Bali Singh is a local don to which Chulbul Pandey goes. What happened between the duo then? How Bali Singh managed to survive? What is the end of this story?

Dabangg 3 is all about Salman Khan. He is outstanding in the movie. Be it his mannerisms, funny dance, antics, dialogue delivery, Salman Khan nailed it every where. Salman Khan’s only motive in the film is to entertain audience and he is successful in that aspect to large extent. Saiee Mukharjee is beautiful. Though short, she has got a sweet role and she justified her character. Sonakshi Sinha is adequate. There is nothing much she can offer in terms of performance. Comedian Ali evoked laughs in a small scene.

Kicha Sudeep needs special mention. One can say it is a brilliant move to cast Sudeep in this movie. He is outstanding and at par with Salman Khan in fight scenes. Climax one on one fight came out really well. Sudeep is just perfect as the baddie. Rest others are fine.

It is not a normal thing to ensure every element kicks in a commercial format movie. Dabangg 3 is one such movie where our prediction never goes wrong yet it is engaging. Prabhudeva has made sure that audiences shouldn’t feel bore for even a minute. Even the fights and songs are shot in an entertaining way. Sajid Wajid music is not up to the standards of Dabangg yet they are okay. Dialogues by Rajshree Sudhakar are good, they are entertaining. Especially punch dialogues have been written well. Production values are top notch. Editing could have been crispier.

Dabangg lives up to the expectations of the franchise. The way lead up to the 4th installment built is interesting too. So Dabangg franchise is going to continue. This movie is made based on Salman Khan’s swag. It is utilized to the core. Wafer thin story and predictable screen play are the only minus. Otherwise, Dabangg 3 would be a paisa vasool entertainer. Nevertheless, Salman fans will love the film after watching. For others it is a comfortable one time watch.

The second half too goes in a regular commercial format. But the makers made sure that proceedings are engaging. Salman Khan is at his best with an entertaining role. Dabangg 3 justifies to the franchise. Though regular, the movie can be enjoyed as a commercial entertainer. Typical Salman Khan mannerisms are to watch out for. Comedian Ali short role worked out well. Stay tuned for the review.

10.48AM: Movie comes to a happy ending with few laughs

10.45AM: Salman and Sudeep flaunts their six pack abs. movie is nearing the end.

10.40AM: Now hand to hand fight between Salman and Sudeep

10.35AM: Sudeep now kidnaps Sonakshi and takes her to mines.. Movie is inching towards the climax

10.23AM: Cat and mouse game between Salman and Sudeep is on now

10.21AM: Special entry of Prabhudeva in this song. Shakes few legs

10.19AM: Salman takes upper hand over Sudeep with an interesting scene. Time for an item song Munna Badnam Hua

10.15AM: Sonakshi takes promise from Salman to kill Sudeep

10.14AM: Sudeep warns Salman Khan in the hospital

10.08AM: Sonakshi just misses an bomb attack and gets hospitalized

10.00AM: Time for a song between Salman and Sonakshi

09.56AM: Now an attack on Sonakshi and Salman comes to the rescue, the scene is shot well

09.50AM: Sonakshi gets emotional hearing about her friend Khushi. She takes promise from Salman to not involve in any kinds of fights

09.41AM: Salman Khan to avenge Kushi’s death involves in a head to head fight with Sudeep and throws him down from a mountain which ends the flashback.

09.38AM: post interval, Salman Khan gets arrested but after 1 year he undergoes police training and becomes Chulbul Pandey, the name given by Khushi

Salman Khan is at his usual best in the movie. His typical mannerisms as Chulbul Pandey will be liked by fans. There is nothing much to discuss about the story in first half. Director has dealt to deal the first half in a comic way. Flash back scenes are regular. Interval block is nice and the revenge mode is set up nicely between Salman Khan and Sudeep. It all depends on the second half now.

09.23AM: Movie comes to interval with Sudeep killing Khushi and beating Salman Khan

09.21AM: Sudeep kidnaps Kushi’s family and even kills her father. He sends the video to Salman

09.14AM: Sudeep comes to know about Salman and Khushi love. He is angry

09:01AM: Sudeep gives his entry in flashback episode with a murder scene. Khushi witnesses that and Sudeep also falls in love with her.

08:56AM: Salman instantly falls for that girl.. Time for a love song

08:53AM: Reason behind the name Chulbul Pandey gets revealed in this movie. Khushi names him as such in marriage alliance scene

08:50AM: First 30 minutes offers nothing much in the story as it mainly depends on Salman Khan’s successful Chulbul Pandey swag

08:45AM: Time for flashback.. Young Salman gets a match with Khushi.

08:40AM: Kichcha Sudeep makes his entry as head of all the gangs. Salman and Sudeep know each other before..

08:35AM: Another comedy fight.. This time with women trafficking gang. Salman is usual in his own style.

08:26AM: Some family romantic scenes are on. Arbaaz Khan makes his entry as brother

08:21AM: Sonakshi Sinha makes her entry in the song. She is Salman’s wife

08:18AM: Intro song is on with lots of dancers. Salman Khan is entertaining with his signature steps.

08:10AM: Salman Khan makes a typical commercial hero entry into the film. A comedy fight is on for Salman with a robbery gang in a marriage

Nandamuri Balakrishna's upcoming film 'Veera Simha Reddy' is all set for a grand theatrical release in January as a Sankranthi special. The movie has...
Read more
Salman Khan's Dabangg is a successful franchise and third installment got released today. This time Telugu version has been promoted well too. Let us have a look on how the film could work this time. Story: Dabangg 3 deals about the story of how an ordinary...Dabangg 3 Movie Review and Rating