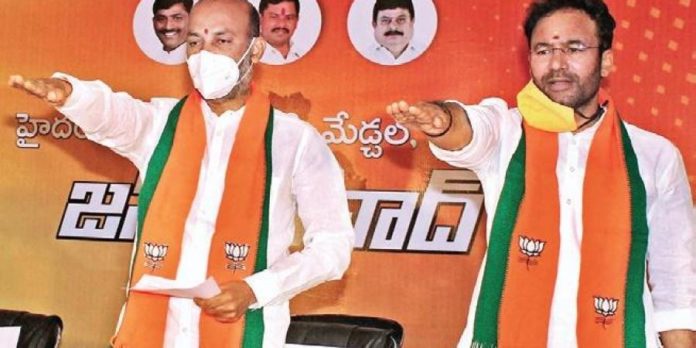 The Telangana Bharatiya Janata Party shocked all after it won the Dubbaka by-polls and won a major share of seats in the GHMC polls, towards the end of 2020. This established BJP as a party to be reckoned with in Telangana, and a party that the TRS should be worried about, in the upcoming general elections.

A lot of fingers point towards Bandi Sanjay, the president of the Telangana BJP, as the reason behind BJP’s victory in the state. Previously, leaders like Bandaru Dattatreya, G Kishan Reddy, Dr. K Laxman, etc., led the Telangana BJP, but none of them were able to produce successful results.

With Bandi Sanjay, a BC member, managing to change the game, Kishan Reddy is said to be worried about the dominance of the BC community in the party and is also said to be intolerant about the fact. The upcoming by-elections for the Lingojiguda municipality on April 30th has further exposed the differences between Bandi Sanjay and Kishan Reddy and has made the cold war between them quite visible.

As Lingojiguda municipality’s seat fell vacant following the death of Ramesh Goud soon after the polls, this municipality was up for elections once again. Kishan Reddy sent a party delegation to Pragathi Bhavan to meet with KTR and request him not to field any candidate from TRS for the Lingojiguda bypoll so that the BJP candidate could win unanimously. KTR is said to have immediately said yes to this. While this was a winning situation for the BJP, this issue has become quite critical for the BJP now.

It is already known that the TRS, Congress, and the BJP were fighting hard against each other in the Nagarjuna Sagar by-polls, and the BJP delegation that Kishan Reddy sent, met with KTR just a day before these by-polls, which took place on April 17th. On the day of the elections, photos of this delegation with KTR were seen all over newspapers, making people believe that the BJP and the TRS were on amicable terms. This reportedly angered Bandi Sanjay, who alleged that Kishan Reddy did this purposefully to sabotage Bandi Sanjay’s name. He is said to have immediately taken this issue to the notice of PM Modi, Amit Shah, and party national president J P Nadda.

This issue is now said to have become serious, given that Kishan Reddy acted out without informing anyone or taking permission from BJP President Bandi Sanjay. It is now to be seen what sort of situations this will lead to in the coming days.