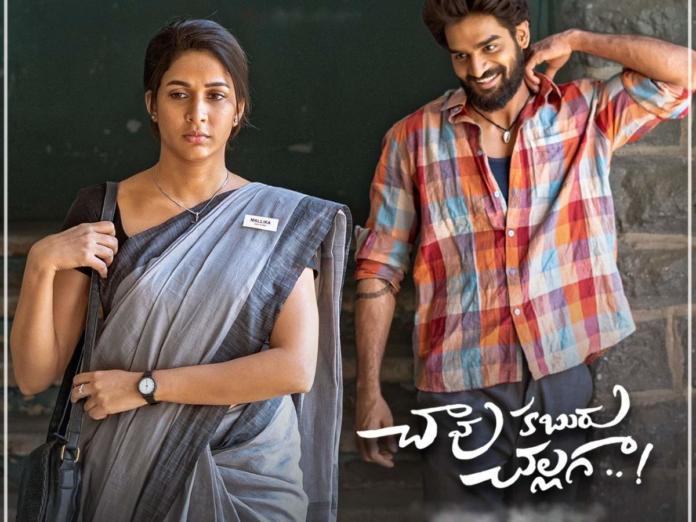 Chaavu Kaburu Challaga, starring Kartikeya and Lavanya Tripathi in the lead roles evoked interest with its intriguing trailer. The film is being promoted as a realistic love drama with author-backed characters. Let us see what the film has to offer.

Story: Basthi Balaraju(Kartikeya) is a hearse driver who goes to any extent to get what he wants. One day, while transporting the mortal remains of a person named Peter, Balaraju sees the deceased man’s wife Mallika(Lavanya) and instantly falls for her. He keeps following her wherever she goes, asking to accept his love. Vexed with this, Mallika files a police complaint against Balaraju and this is when there is a twist in the plot as the latter’s mother, Aamani comes in and changes the course of his life. The rest of the story unveils the other side of Balaraju and his love track with Mallika henceforth.

Kartikeya delivers a natural performance in the role of Basthi Balaraju. He makes the audiences connect with the character with his excellent portrayal and body language. He has improved a lot as an actor. Lavanya plays a de-glam role and her character is a meaty one. She comes up with a fine performance and does full justice to the role. The lead pair emote particularly well in the emotional scenes in the second half.

Senior actress Aamani plays the male lead’s mother and she is at her usual best. Murali Sharma and Srikanth Iyengar play important roles and they deliver what is expected of them.

Karm Chawla and Suneel Reddy’s visuals are of top-tier quality. They create a rustic feel with their visual composition. Jakes Bejoy’s songs are good and his background is even better. He carries the vibe of the film with his subtle background music.

Koushik Pegallapati picks a plot which demands the very best from a filmmaker and being a debutante he does reasonably well in presenting his story. He pens peculiar characters and creates funny scenarios surrounding them. Moreover, the basic premise of the film is very interesting. The first half is breezy and has a hint of freshness to it. But the emotional scenes in the second half are not of desired impact and they look subdued. The track between the male lead’s parents is not convincing enough and it turns out to be a bit farcical. Certain scenes which form the emotional core of the film do not pack a punch.

Chaavu Kaburu Challaga has a breezy first half but things don’t go quite so smoothly in the all-important second half as the emotional episodes are underwhelming. The core plot is compelling and catches the attention but the presentation, not quite. The lead pair, Kartikeya and Lavanya Tripathi come up with fine performances and the dialogues are good. All in all, Chaavu Kaburu Challaga is another film that falls under ‘good first half – not-so-good second half’ category.

Watch or Not?: You might give it a try if you have way too much spare time.

06:25 AM: Mallika develops a soft corner for BalRaju and proposes that they stay as friends. Murali Sharma brings an alliance for Mallika. BalRaju insists that they get married and live life together. Mallika wants to get married with person that her father in law brings.

06:25 AM: Anasuya fans will be happy with her mass steps and glam show in the item song. BalRaju understands his mother’s love for another person and tries to get her married. BalRaju’s thought convinces Mallika a bit and changes her thinking towards him.

First half of the Chaavu Kaburu Challaga Movie is a time pass with lighter vein comedy and wafer thin story. Karthikeya as BalRaju is superb, his dialogue delivery and performance are top notch. Lavanya excelled in de glam role. Second half of the move depends on how BalRaju convinces Mallika to fall for his love.

06:00 AM: Balaraju still goes to Mallika and asks why she is not considering him. Mallika being a nurse in maternity ward values a lot for birth and life where as Balaraju as a funeral service does not care much for life. Mallika sites this reason and says that they are compatible for each other and can not lead life together. Interval time.

05:50 AM: Balaraju gets a surprise, a twist that he can not withstand. His persistence does not make Mallika consider his love. He goes to Mallik’s house, gets caught by police. Police beats him black and blue and gets out on a condition that he is not going to disturb Mallika anymore. Balaraju’s characterization reprises Puri Jagan’s hero roles.

05:40 AM: Mahesh Achanta acts as BalRaju’s side kick. Murali Sharma is Mallika’s father-in-law an orthodox chanracter. BalRaju stalks Mallika to marry him, teasing scenes are fun to watch. Third song Orakanti tho ala is a plausible one. Good dialogues from BalRaju character, casual & witty.

05:20 AM: Basthi Balaraju (Karthikeya) runs a funeral service, introduction with a song. He proposes Mallika (Lavanya Tripati) at her husband’s funeral. Karthikeya acts with lot of ease, montage songs that comes as second song is good. First 15 mins into the movie goes well with lighter vien comedy.

Karthikeya‘s upcoming film ‘Chaavu Kaburu Challaga’ is hitting the big screens today in US with Premier shows and it’s getting a big release in India few hours after. The Karthikeya starrer is releasing in a big number of theatres in Telugu states. The film will be released in 430 theatres, of which 151 theatres are from Telangana. Touted to be a romantic comedy-drama, CKC is the big release of this week in Telugu.

It is known that Nandamuri Balakrishna's Akhanda will be hitting the silver screens on the 2nd of December. Nandamuri fans are hoping a mass...
Read more
Movie News

It has been close to a month since the sad passing away of Kannad superstar Puneeth Rajkumar and his fans and followers are yet...
Read more
Movie News

Boyapati Sreenu: I am the reason behind Balakrishna’s injury

Speaking at the pre-release event of Akhanda the other night, Boyapati Sreenu made an interesting revelation about Nandamuri Balakrishna's injury. "I am the reason why...
Read more
Movie News

It is already known that Telangana Chief Minister KCR went to Delhi on November 21st, along with some state ministers and some top officials...
Read more
Political News

Srilakshmi or Neerab: Who is going to be Jagan’s pick?

The term of the current Chief Secretary of Andhra Pradesh, Sameer Sharma, is about to come to an end on November 30th, as he...
Read more
Political News

KCR to take a crucial decision

It is already known that Telangana Chief Minister staged a protest against the Central Government, over the Centre not procuring Paddy from Telangana. Despite...
Read more
Political News

Russian President to set his foot on Indian soil

Russian President Vladimir Putin, who needs no introduction, will visit India on December 6 for the annual bilateral summit. The Ministry of External Affairs’ official...
Read more

It is already known that Telangana Chief Minister KCR went to Delhi on November 21st, along with some state ministers and some top officials...
Read more
Political News

Srilakshmi or Neerab: Who is going to be Jagan’s pick?

The term of the current Chief Secretary of Andhra Pradesh, Sameer Sharma, is about to come to an end on November 30th, as he...
Read more
Political News

KCR to take a crucial decision

It is already known that Telangana Chief Minister staged a protest against the Central Government, over the Centre not procuring Paddy from Telangana. Despite...
Read more
Movie News

It is known that Nandamuri Balakrishna's Akhanda will be hitting the silver screens on the 2nd of December. Nandamuri fans are hoping a mass...
Read more