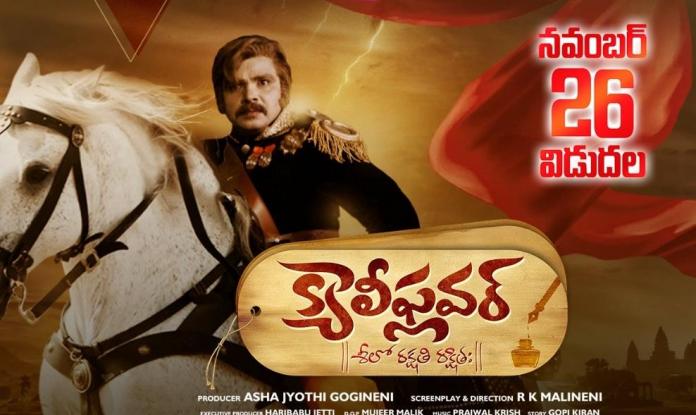 A foreigner named Andiflower (Grandfather of Cauliflower) settles in India after witnessing the greatness of women in our country. Later, he marries a women from the same country. After this brief introduction, Cauliflower (Sampurnesh Babu), the grandson of Andiflower, who follows his grandfather footsteps decides to marry a girl from the same land at his 35 years age. But to his bad luck, Cauliflower will be raped by three women. Rest of the story is how Cauliflower start a legal battle and gets justice.

Sampurnesh Babu gave a decent performance in the lead role. His facial expressions and comic timing in a few episodes will evoke good fun. His acting at the state assembly with only a cauliflower on his body will attract the audience to an extent.

Heroine Vasanthi, actor Posani are okay in their given roles. Especially, Posani as a cop will generate good fun in some combination scenes with Sampurnesh Babu.

Other artists who is crucial roles are just okay with their performances.

Director RK Malineni’s idea of making a spoof comedy drama with Sampurnesh Babu is appreciatable but the director completely neglected the presentation part as expect for a couple of comedy scenes, the film offers nothing new to the audience. Instead of focusing on parody scenes, the director would have used Sampu to generate some healthy comedy.

Music by Prajwal Krish is okay but would have been even better. Cinematography work is adequate. Editing by Manjir Malik is fine. Production values for this low budget film are dull.

In an overview, Cauliflower is a spoof comedy drama that lacks story and proper scene order. Uneven screenplay added with depth less proceedings makes the film a boring watch during this weekend.

ZEE5, which has been dishing out a wide variety of content in various languages, has recently come up with yet another interesting web series...
Read more
Movie News

It is a known fact that the Nation-award winning actor Dhanush has teamed up with director Mithran R Jawahar for the fourth time for...
Read more
Movie News

Aishwarya Arjun, the daughter of popular actor and director Arjun Sarja, is all set to make her Telugu debut with Vishwak Sen's upcoming film,...
Read more

Mood Of The Nation: Majority of voters are with YSRCP

Andhra Pradesh Chief Minister YS Jagan Mohan Reddy is still ahead of his opposition leaders as far as his popularity is concerned. There are...
Read more
Political News

YS Sunitha Reddy approached the Supreme Court regarding the murder case of her father and former minister YS Vivekananda Reddy. In her petition, she...
Read more
Political News

When Nara Chandrababu Naidu was the Chief Minsiter of Andhra Pradesh, he laid down several plans for the development of Amaravati as a world-class...
Read more
Political News

Jagan to have a detailed discussion with the PM!

ZEE5, which has been dishing out a wide variety of content in various languages, has recently come up with yet another interesting web series...
Read more
Movie News

It is a known fact that the Nation-award winning actor Dhanush has teamed up with director Mithran R Jawahar for the fourth time for...
Read more
Movie News