Analysis: Can herd immunity control the covid-19 transmission in India? 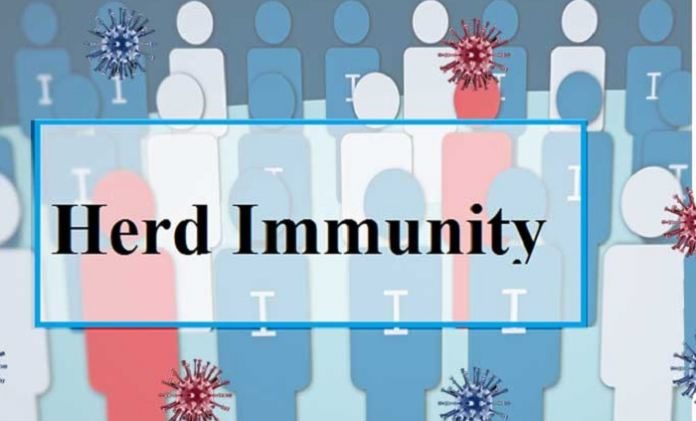 Herd immunity is an epidemiological concept that depicts the state where a group of people are sufficiently immune to a disease that the infection will not spread within that group. In other words, enough people can’t get the disease – either through vaccination or natural immunity

For instance, if we consider influenza, it begins with cold and fever, while is truly difficult if not prevented and causes dreadful deep rooted intricacies later. Flu has a Reproductive rate (R0) of 2, which implies that in a population that is completely susceptible – which means nobody is immune to the infection – each individual who acquired the infection will transmit the disease to 2 individuals and so on.

How does herd immunity work to make us immune?

Scientists have studied seasonal flu for decades. They predicted the basic reproductive rates(Ro) for every disease, in contrast transmission rate of novel corona virus is unpredictable because it’s so new with a changing patterns and size of it. This means COVID-19 is something of a wild card in terms of how far it will spread and how many deaths it will cause.

There are two mechanisms currently to explain herd immunity:

Without vaccination approximately 95 percent of the population gets infected in due course of time.

We can increase that number by vaccinating, because vaccination makes people resistant to infection and can stop infected people passing on the disease to everyone. If we can get enough people immune to the disease, then it will stop spreading in the population.

2. Allowing population to get exposed to disease

Although 95% population require vaccination, in contrast there are still some people-5 percent of the population – who don’t fall ill, because once everyone else is immune there’s no one left to catch the disease

In the recent times Sweden has witnessed success rate by allowing the population to get exposed to the disease and develop immunity gradually. This was experimented with an anticipation that they would soon recover and never catch the corona disease in a second outbreak. However, there are no proven methods of how successful it could be in other countries.

“No country can afford a prolonged period of lockdowns, and least of all a country like India. You may be able to reach a point of herd immunity without infection really catching up with the elderly. And when the herd immunity reaches a sufficient number the outbreak will stop, and the elderly will also be safe.” said Jayaprakash Muliyil, a prominent Indian epidemiologist.

A team of researchers at Princeton University and the Center for Disease Dynamics, Economics and Policy, a public health advocacy group based in New Delhi and Washington, has predicted India as a place where this strategy could be effective, because its disproportionately young population would-be less vulnerable to hospitalization and death.

They said allowing the virus to spread in a controlled way for the next seven months would give 60% of the country’s people immunity by November, and thus uproot the disease.

The difficulty of social removing in populated environments like in numerous urban communities and villages in India, the absence of testing kits to identify diseases and the human enduring that happens in lockdowns recommends an alternate way might be required in these spots.

In addition to that, poor has only two options, whether to opt for safety or hunger. Once the lock down is lifted they would go berserk. Although lockdown could control the disease for a transient phase, there’s no guarantee whether it succeeds in halting in densely crowded areas in India.

To do this, the Princeton and CDDEP group suggests lifting India’s exacting lockdown – which has been stretched out to May 3 – and letting the vast majority of the population younger than 60 come back to normalcy. However, social distancing, wearing masks and banning mass gatherings in a controlled way would be effective.

The government of Prime Minister Narendra Modi has still been reluctant to adopt such a strategy.

Our medical health writers from Telugu bulletin.com predict that the government would adopt a mix herd strategy in the future I.e allowing partial lift of lock down in areas crowded with people younger than 60 (to voluntarily follow the same strict rules so as to allow development of immunity) and safeguard the old and other aged people with prevailing diseases with vaccination. This would not create increased demand in testing kits among youth as they would slowly develop immunity and cannot transmit disease in old. In this way India could be a little safer in the second corona outbreak.