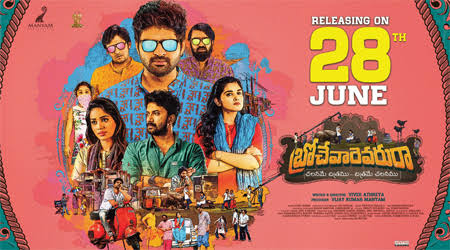 Story: Vishal (Satyadev) aims at becoming movie director for which he makes several trials and finally convinces a producer. But the producer asks him to convince a top heroine to act as the lead in the film. Vishal then approaches Nivetha Thomas. But the film takes interesting turn when some other story takes the lead. How is the other story linked with the actual story and where the male lead Sri Vishnu enters the story and takes forward the things. The answers for all these questions can be found in Brochevarevarura.

Performances: Nivetha Thomas excelled in her role. She came up with such an performance where it is tough to imagine any other actress in the role she played in the film. Though Sree Vishnu is the male lead, even Rahul Ramakrishna and Priyadarshi got a lot to do in the film. The trio nailed the scenes in their combination.

Analysis: Brochevarevarura deals with two stories that go on a line and shares a common stage at one point. Though it is a thriller, the makers made sure that that it is blended with enough fun elements. Every scene appears gripping and increase hopes on the proceedings. While the first half is filled with entertainment, it’s in the second half, the actual story takes the lead. The BGMs are a sure mention in the film as it travels with the flow of the film. Over all Brochevarevarura is a decent attempt.

Finally: Brochevarevarura can be considered for its strong dose of fun and thrilling elements.