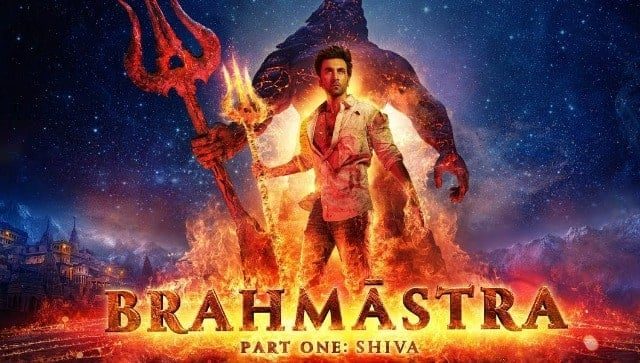 The entire story revolves around three pieces of Bhramastra taken care by Brahmansh group. While one piece is safegaurded by Anish( Nagarjuna), the second peice will be with scientist Mohan Bhargav ( Shah Rukh Khan). To gain ultimate power by bringing all the three pieces together, the villain’s gang led by Mouni Roy’s character keeps on trying despite multiple failures. Whereabouts of the 3rd piece, how DJ Shiva (Ranbir) and his love story with Isha( Alia Bhatt) is interconnected to the story forms the crucial point of the plot.

Ranbir Kapoor and Alia Bhatt shine as the lead pair. The chemistry between them brings authentic texture to the love story. While Ranbir is good with his performance, Alia is also seen in a character which has scope to perform.

Stalwarts such as Amitabh Bachchan, Nagarjuna and Shah Rukh Khan are fine in their given supporting roles. Their screen presence is undoubtedly an added advantage for the movie.

Mouni Roy as evil lady and her gang members are okay with their performances.

Majority of the VFX work is done in a perfect manner. For our Indian standards, graphics work is commendable.

The music department did a good job with the songs and all the songs in the film are good. On the other hand, the BGM fails to click many a times, due to which some key episodes are not elevated.

The cinematography work is alright. Editing Prakash Kurup could have been better. Director Ayan Mukherjee’s ignored the writing part and completely focused on the VFX part.

Brahmastra is a visually grand film that has fine performance from the lead pair. But on the flipside, lack of engaging presentation, poor writing, and screenplay disappoints the audience. First half of the film focuses mainly on the love story and makes it a bearable watch. But the 2nd half loses steam completely and a heavy/prolonged climax makes it even more worse.

05.15 A.M: Shiva gets brahmastra because of love with in him, movie ends with a long overwhelming climax

05.00 A.M: Shiva decides to fight for the cause. Junoon ( Mouni Roy) attacks guru ( Amitabh ), she wants to attack Shiva for special powers

04.00 A.M: Second half of the movie starts with a chase, the action sequences are good followed by few mediocre scenes

03.25 A.M: Shiva goes to Varanasi to save Nag. Kumkumala song is good.

03.10 A.M: The first 30 minutes of the movie generate some interest in what will happen next. The first song on Sri Ram is excellent. Love scenes with Alia and Ranbir are adequate.

02:45 A.M: The film begins with Chiru introducing Ranbir as Shiva, followed by Srk as Mohan, a scientist who fights off thugs while sporting an ankle that has a powerful prong.

Brahmastra: Part One – Shiva is a fantasy adventure film written and directed by Ayan Mukerji. It is produced by Karan Johar, Apoorva Mehta, Namit Malhotra, and Mukerji in his debut production under the production companies Dharma Productions,

It stars Amitabh Bachchan, Kapoor, Alia Bhatt, Mouni Roy, and Nagarjuna Akkineni. The film is intended to serve as the first installment of a planned trilogy as part of its own cinematic universe titled Astraverse.