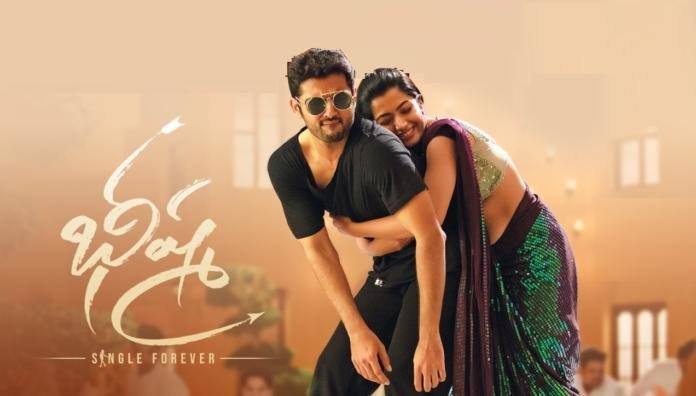 Bheeshma has Rashmika Mandanna in the female lead role. Venky Kudumula has directed it. Ananth Nag, Sampath Raj are playing crucial characters. Bheeshma has done a pre release theatrical business of around 24 Crores. With the hype around it, the movie is having biggest ever release for Nithin.

Bheeshma (Anant Nag) is the founder of Bheesma Organics who is never married and about to retire is in-search of his successor. Bheesma (Nithiin) meets Deva (Sampath Nag) ACP in an interesting situation and joins him for moral training. Chaitra (Rashmika) is teh daughter of Deva. Bheesma (Nithiin) meets her and falls in love and tries to impress her in a debate between Raghavan (Jisshu Sengupta) and Bheeshma (Anant Nag). Chaitra falls in love with him, Bheeshma (Anant Nag) also gets impressed with him and announces him as operational CEO for 30 days but asks him to prove himself. The rest of the story is about how Bheeshma proves himself and protects Bheeshma Organics company and what happens between him and his lady love.

Nithiin gave his career best performance, his acting is matured and he took his comedy timing to next level in this movie. Scenes between Nithiin and Vennela Kishore are hilarious and they are through out the movie. Rashmika’s presence and her acting is an asset to the movie, her dance in “What a beauty” is too good. Sampath Raj did a good act with his comedy timing in this movie. Vennala Kishore is huge plus for this movie, no one could have done a better job. Brahmaji comes in few scenes but brings laughs for sure. Raghu Babu combination scenes with Vennela Kishore are good.

Venky Kudumula bags the credit with his direction and writing. A director with good taste for comedy timing is in making, he is brilliant with his pen and direction. One can expect great comedy entertainers from him. Bheeshma is a simple plot with very good treatment. Mahati Sagar’s music for songs could have been better, decent background score. Single’s anthem and What a beauty are good, rest are okay songs. Sai Sriram’s did good with his lens. Naveen Nooli did a good job.

Bheeshma is a breezy entertainer with a thin story line but the way director treated the plot makes it a very good watch. Audience will witness  hilarious comedy scenes in first half and good 40 mins in second half. Bheeshma stands as post sankranthi winner and will have a good run in all centers and overseas.

Immediate reaction at end credits:
Weak climax, a good 40 minutes in second half is good.

Watch or Not?
A good watch

It might be a decent fare across the globe, could get decent openings. It will do good at box office given no big movies in the next 4 weeks.

Final Report: Bheeshma has got a simple story, but the way Venkat treated it makes it a breezy entertainer. First half is packed with hilarious comedy scenes and good 40 minutes of second half is also filled with nice comedy. Apart from Entertainment, good production values, racy screenplay, Ok songs and BGM makes it a good watch.. Watch this space for complete review

7:35 PM EST: Movie comes to an end with Ananth nag telling why he chose Bheeshma (Nithin) as the CEO connects back to the beginning of the movie.. Please watch this space for a comprehensive review in couple of hours..

7:30 PM EST: Nithin gives an interesting twist to Raghavan in a mind game played by Raghavan to destroy Bheeshma Organics

7:15 PM EST: Interesting scenes between Jisshu and Nithin with Light comedy and warning drama are on now

6:50 PM EST: Hilarious scenes between Nithin and Vennela Kishore are on now

6:35 PM EST: Ananth Nag announces Nithin as operational CEO and challenges him to prove himself in 30 days..Situational comedy is on and it makes you laugh for sure..

6:25 PM EST: Pre interval scenes are on now where Sampath learns that Chaitra is in love with Nithin and he goes to Naresh’s house and talks low of Nithin and Naresh.. Naresh faking about Nithin being the hier of Bheeshma evokes good laughter.. Perfect Interval break

6:20 PM EST: Scenes where Chaitra gets impressed with Nitin’s speech on Organic farming and expresses her love could have been better.

6:10 PM EST: Drinking scene between Sampath Raj and Nithin is super hilarious..Naresh is introduced as Nithin’s father. Bharamji, Nareesh Sampath are friends and they get separated for a silly reason.

6:05 PM EST: 45mins into the movie its a breezy entertainer so far with good comedy

5:58 PM EST: Nithin’s text message conversation with Sampath Raj is hilarious. He introduces himself as ACP to Jisshu

5:55 PM EST: Jisshu Sengupta gets introduced as Chaitra’s father..he comes up with a new research which can cut down the crop’s yield time to half

5:40 PM EST: Rashmika gets introduced now as Chaitra. She works at Bheeshma Organics

5:38 PM EST: Nithin is a Meme creator in TV5. He joins Sampath Raj (police commissioner) station fortraining in an accidental situation. Comedy scenes between Nithin and Sampath Raj are hilarious

5:28 PM EST: Nithin as Bheeshma too gets introduced with a nice comedy scene alongside Vennela kishore followed by “single” song

5:20 PM EST: Movie opens up showing Bheeshma organics company. Ananth Nag as Bheeshma, who is in search of his successor who has same ideology gives a speech on organic farming.

Tollywood has been facing a slump since Sankranthi movies became block busters. Though close to dozen movies released so far after Sankranthi block busters Sarileru Neekevvaru and Ala Vaikunthapuramulo, none have succeeded in bringing out the positive response. All the films failed and Telugu audience are waiting for a good movie since then. Bheeshma which stars Nithiin in the lead could be that movie with promos and songs created positive impression on the movie. Organic farming, an interesting topic is touched as a sub plot in the movie.

Bheeshma has Rashmika Mandanna in the female lead role. Venky Kudumula has directed it. Ananth Nag, Sampath Raj are playing crucial characters. Bheeshma has done a pre release theatrical business of around 24 Crores. With the hype around it, the movie is having biggest ever release for Nithiin. Huge numbers can be expected on Day 1.

Telugu Bulletin will be bringing out the live updates of the movie first on net and the review we provide will be unbiased and truthful. Wait and watch this page for first on net updates and review of Bheeshma.

Owing to the second wave of Covid pandemic, many Telugu biggies are being postponed. Love Story and Tuck Jagadish which were supposed to release...
Read more
Movie News

A day after joining a hospital due to a cardiac arrest, Tamil actor-comedian and Padma Shri awardee Vivek has passed away at 4.45 am...
Read more

Prabhas will be romancing Pooja Hegde in Radhe Shyam which is slated for worldwide theatrical release on 30th of July. The final schedule is...
Read more
Political News