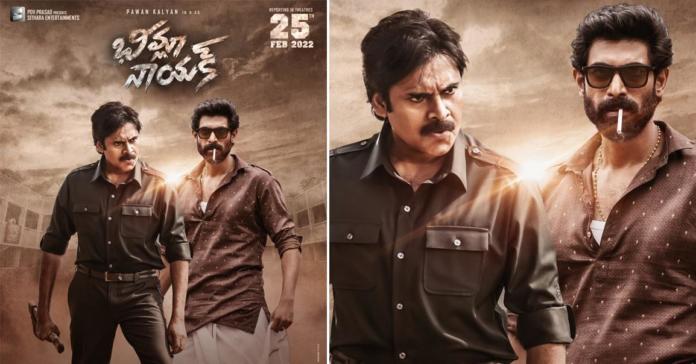 Bheemla Nayak is one of the most anticipated Telugu films in recent times and the stakes couldn’t have been higher. The Pawan Kalyan and Rana Daggubati starrer is hitting the theatres across the globe today. Here’s our review of the high-octane action drama.

Danny, a retired Miltary personnel gets into trouble with the law under SI Bheemla Nayak’s jurisdiction. Before going to jail, Danny tells Bheemla Nayak that he will get back at him the moment he gets bail. That begins the battle between the duo. What turns it takes with involvement of Nayak’s wife (Nithya Menon)and Daniel’s dad (samuthirakani) is the rest of the story.

Pawan Kalyan delivers a towering performance in the role of a straightforward cop. His electrifying performance is sure to leave his fans greatly excited. His dialogue delivery and aggressive mannerisms offer a mass feast.

Rana Daggubati is equally good in his role. He matches Pawan Kalyan’s intensity and that is not an easy thing by any stretch of imagination. The way Pawan and Rana complement each other through the course of the film with their exquisite portrayals is of top notch quality.

Trivikram has made a few cosmetic changes to the narrative. His screenplay is much more pacy when compared to the original. There is more mass appeal in Bheemla Nayak than what there is in Ayyappanum Koshiyum. His dialogues are witty and hard-hitting as well. Thaman’s riveting background score is impeccable. The songs are of elite quality and the background score is as good as it can get. Cinematography is spotless. The visual storytelling is bang on point.

Saagar K Chandra handles the remake with great finesse. He adapts Trivikram’s modified screenplay and plays to the masses. His taking is to be complemented. The production values are of usual best quality, as one would expect from a big-ticket film bankrolled by Sithara Entertainments.

What’s Hot?
Pawan Kalyan and Rana’s performance
Dialogues are good in pre interval Bus scenes and pre climax
BGM is good is pivotal scenes
Second Half and Climax
Action Sequences in second half

What’s Not?
First half is slow
Couple of Songs could have been picturized well
Choreography

Verdict:
Overall Bheemla Nayak is a good movie. Second half scores better than first. As touted by the makers, the movie is about the conflict between self esteem and arrogance. Pawan Kalyan and Rana did really well in their roles. Thaman’s BGM is good in pivotal scenes. Adavi Thalli song sets up the mood for final clash. Rao Ramesh plays a small role but his comedy is effective. Climax has a well packed high octane fight. Trivikram did a good job in changing the original to suit telugu sensibilities.

Bheemla Nayak will be liked not only by Pawan fans but also by general audience.

We are in the theater for the Bheemla Nayak premier show. Get ready for the power storm 🔥 live updates.
follow this page for no spoiler live updates https://t.co/N2FEV16xKU#BheemlaNayak #BheemlaNayakTrailerStorm #PawanaKalyan pic.twitter.com/7yIIyRALG6

12:39 AM IST : Ego dialogues between Pawan Kalyan and Rana are good.

1:00 AM IST : Murali Sharma as Pawan Kalyan’s higher officer. Nithya Menon as PK’s wife is okay. Rana gets presented in court, he is son of a ex MP.

1:10 AM IST : Daniel (Rana ) takes it to heart about getting arrested. Bheemla Nayak song, limited dance in the song. Sunil, Hyperadi and Sapthagiri are in the song.

1:14 AM IST : Rana comes out to jail and leaks the video that was secretly taken while he was in police station. BGM is okay could have been better in the confrontation scenes. Rao Ramesh also does not like Pawan Kalyan, he joins hands with Rana in taking revenge with Bheemla Nayak.

1:25 AM IST : Bheemla Nayak gets arrested for opening liquor bottle in Police station. Rana has to sign every Friday and he does not like the situation. Nithya Menon instigates Bheemla Nayak and  Daniel’s father instigates Daniel.

1:40 AM IST : Bheemla Nayak takes revenge after he comes out of the jail. Lala Bheemla song is an average show on the screen. Bheemla Nayak and Danny confrontation scene in Bus is really good.  BGM is good in this scene.

Interval Report: Bheemla Nayak’s first half fairs average. Pre interval Nayak’s and Danny’s confrontation scenes are good. Rao Ramesh’s comedy is good. Two songs that come in the first half are average on the screen. Sound Mixing and BGM seems to be weak, they are sporadically good. Let’s see how second half of will be ….

2:20 AM IST : Bheemla Nayak is a forest Thanda leader “Kokkili Devara” in flash back, does not have much to offer. Nithya Menon gets arrested, Nayak goes to Danny’s house and gets challenged for a fight in thanda. Samuthirakani dialogues are good ” History eppudu gelichinode rastadu, manam gelichaka cheripi rasukovacchu”. Adavi Talli song is a good emotional ride.

2:30 AM IST : Back to back high octane scenes in the last 30 mins. One on one climax fight is really good with impressive BGM. Movie ends with a positive note.

Final Report: Bheemla Nayak is a good movie overall. Second half scores better than first. As touted by the makers, the movie is about the conflict between self esteem and arrogance. Pawan Kalyan and Rana did really well in their roles. Thaman’s BGM is good in pivotal scenes. Adavi Thalli song sets up the mood for final clash. Rao Ramesh plays a small role but his comedy is effective. Climax has a well packed high octane fight. Trivikram did a good job in changing the original to suit telugu sensibilities. Watch this space for full review ..