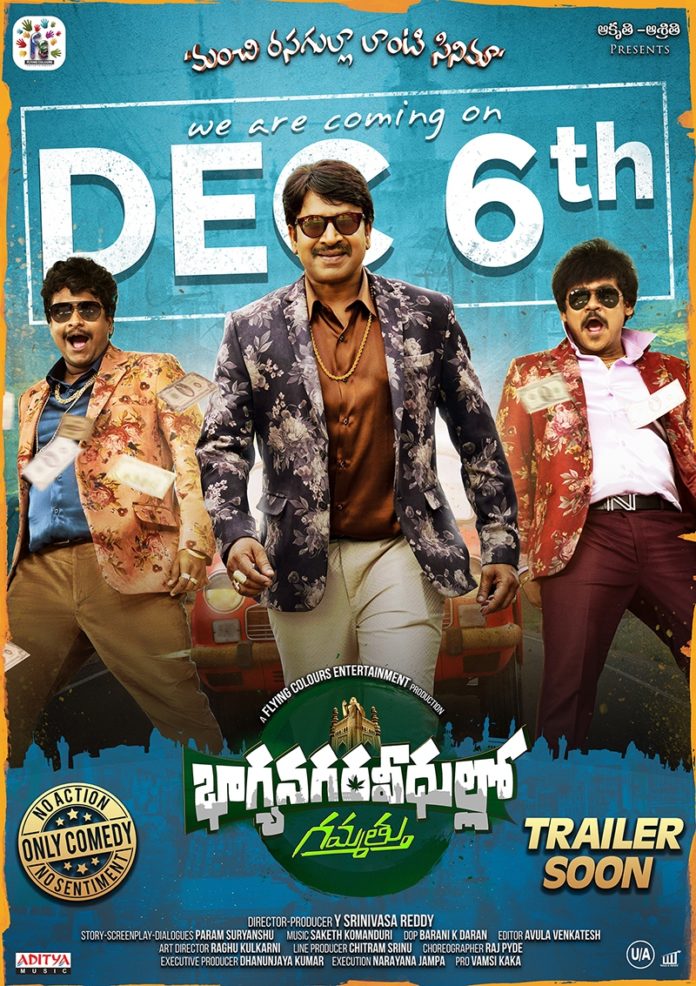 Comedian Srinivasa Reddy has turned hero, director and producer for the film Bhagyanagara Veedhullo Gammatthu. Almost all the top comedians in the industry has played a part in this movie. The film’s trailer promised to be a witty entertainer. The film got released on December 6th. Read the review to find out how the movie is.

It is a story which happens in a day. Srinu (Srinivasa Reddy) is a wannabe actor who also buys lottery tickets hoping to hit the bulls eye one day. Jojo (Satya), Peter (Shakalaka Shankar) are his friends. One fine day, Srinu gets bumper lottery and wins 2 Crores. But unfortunately the ticket goes missing. Their mission is now to find that ticket which will solve all their problems. However, Kokila a journalist comes into their lives.

There is another track going on in the movie of Cobra (Chitram Sreenu) who is a drug lord in the city. ACP Swatantra Kumar (Vennela Kishore) is after them. How these two threads gets interlinked and What happened in the end? Will Srinu finds his lottery ticket? Who is Kokila? To know these answers, you have to watch the movie on silver screen.

Almost all the top comedians in the industry played important roles in the film. All of them have done decent job. Srinivasa Reddy, Shakalaka Shankar, Satya gets major screen space. All the characters tried hard to evoke laughs. However most of the part it doesn’t work. Shakalaka Shankar’s Batuku Edla Bandi comedy spoof with Jhansi stands out and Rasagulla episode involving Vennela Kishore and Satya is hilarious. Other than these, there is nothing much to discuss about the performances.

Cinematography is too bland. Few scenes go out of focus. Editing is too bad. Movie moves at a snail pace and there are lot of editing mistakes done. Music by Saketh is just ordinary. No song registers in your mind. Sounds that are popular in social media spoofs were used. Param Suryanshu has provided Story, Screenplay and dialogues for the movie. Story is very thin. It suits Youtube content well, but sadly they cannot match the quality of Youtube content creators. Screenplay has lots of issues. Team decided to use many trendy dialogues. Though they were taken from our daily issues and trending topics, they didn’t gel with the flow. Direction by Srinivasa Reddy is pretty average. Amateurish is written all over the movie. Production values are OK. Lot of money goes wasted.

Srinivasa Reddy is a popular comedian who turned hero with Jayammu Nischayammura and continued it with Anando Brahma. He is known as a sensible actor. But Srinivasa Reddy shocks everyone by choosing such a bland story for his debut direction. He is the producer for this project too and one who watches the film doubt, how Srinivasa Reddy decided to produce such a heart less script. Bhagyanagara Veedhullo Gammatthu tried to be every body and but ends being nobody. They tried to be witty, they tried to go with spoof, they tried to convey a message, but all are done without any commitment. Finally, audience cannot travel with any character in the movie. Other than, two episodes (Batuku Edla Bandi and Rasagulla) no scene will make you laugh. Though promoted as an out and out comedy entertainer, Bhagyanagara Veedhullo Gammatthu offers nothing to every section of audience.

Compared to the first half, the second half is somewhat better with Batuku Edla Bandi scene and Police Station Rasa gulla scene evoked few laughs. Overall, the film is a below-average stuff with few laughs, here and there.

10.25 P.M: Movie comes to an end with every track gets solved under ACP Vennela Kishore.. Review coming up soon

10.16 P.M: Finally the movie is nearing completion as all scenes converge to Vennela Kishore police station. some clarification scenes are going on.

10.05 P.M: Nothing has improved in second half with slow pace also not helping matters

09.52 P.M: After lots of searches, lottery ticket is found.. Dream song on for Srinivasa Reddy and gang

Bhagya Nagara Veedhullo Gammatthu though is touted as an out and out fun entertainer, nothing of that sorts happened. First half is a complete boredom with Srinivasa Reddy failing to generate to comedy with lots of spoofs and latest social happenings. We have to wait and see if Srinivasa Reddy and Co has done a better job in second half

09.00 P.M: Movie is into interval now with Vennela Kishore punch dialogue Iam waiting, in the likes of Chiranjeevi from Khaidi No 150.

08.50 P.M: Movie is moving at a snail pace. Already Srinivasa Reddy has used lots of spoofs but nothing sort of hilarious comedy is generated

08.45 P.M: Movie goes into confusion comedy mode with Vennela Kishore trying to catch Chitram Sreenu and gang for dealing drugs. On the other hand, Srinivasa Reddy’s lottery ticket search is going on.

08.38 P.M: Some laughs are generated with ticket searching episode in the first house

08.30 P.M: Search for a lottery ticket has started now as Srinivasa Reddy misses it after winning 2 Crores in lottery

08.24 P.M: Chitram Sreenu gang is trying hard to find Kokila. She is traveling with Srinivasa Reddy and batch

08.12 P.M: First song in the movie.. Three buddies are searching for a heroine in a short film

08.10 P.M: Characters are being introduced one by one.. Raghu Babu and Praveen makes their way into the movies as Youtube directors

08.09 P.M: Srinivasa Reddy gets introduced as Srinu who is a budding actor. His buddies are Satya and Shakalaka Shankar

08.07 P.M: Vennela Kishore makes his entry into the film as ACP Swatantra Kumar. Titles are on now