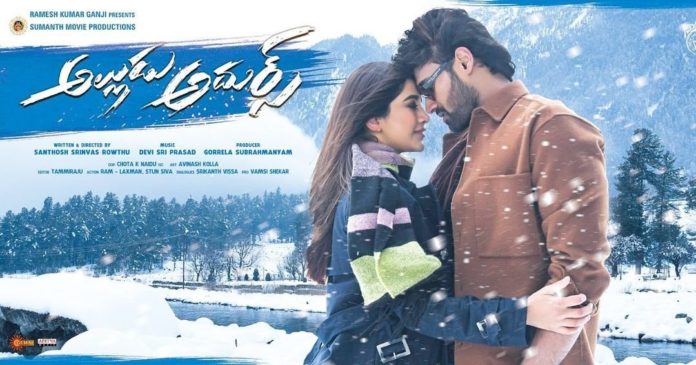 Alludu Adhurs marks the coming together of Bellamkonda Srinivas and Santosh Srinivas who are in need of a solid commercial hit. The film was promoted as an action entertainer with a horror comedy angle to it. Scroll on to read our review of the movie.

Sreenu (Bellamkonda Srinivas) decides not to fall in love ever again after a girl named Vasundhara leaves him in his childhood days. He pledges to remain single for the rest of his life and keeps roaming around with his friends. One day, Sreenu comes to know that his friend is being attacked by Jaipal Reddy (Prakash Raj) and his henchmen for trying to woo the latter’s daughter Kaumudi (Nabha Natesh). Sreenu falls for Kaumudi right at first glance and vows to win her love at all costs. Meanwhile, Gaja(Sonu Sood) a real estate tycoon tries to kill Sreenu. Why does Gaja plan to kill Sreenu? Can Sreenu evade Gaja and win the love of Kaumudi and also impress her father Jaipal Reddy? To know the answers to these questions, you should watch the film.

Bellamkonda Srinivas plays the protagonist in the movie but the real hero is Soni Sood, who played a full-length entertaining role after a long time. His comedy timing and portrayal of Gaja, a real estate bigwig are bang on point. Bellamkonda Srinivas tries to fit into the character of a happy-go-lucky lad but it feels like he tries a bit too hard and his antics look a tad awkward every now and then. He dances well and also does a pretty good job with the action sequences. Nabha Natesh is shown as a glamour doll. Anu Emmanuel makes Avery brief appearance and there is nothing much to speak about her role. Bramhaji, Chammak Chandra, and Satya provide some comic relief in the second half.

The film is a bit weak when it comes to technical values. The music, and cinematography are strictly ordinary. Avinash Kolla’s art work is decent. Devi Sri Prasad’s background score is sparingly good. Editing is weak as multiple scenes in the film have been stretched beyond the threshold point.

Santosh Srinivas does not change his narration or screenplay one bit. He follows the exact same template he incorporated for his previous films despite facing bitter results in the past with his approach. Not even a single character was designed at least on an acceptable level. There is no emotional connect or driving force behind the narrative. Majority of the comedy scenes are cringe. Gorrela Subrahmanyam spent big bucks on the film and one might wonder how he could trust a story like this.

Alludu Adhurs has so many flaws that is tough to point out and count every single one of them. Sonu Sood evokes decent fun with his comedy timing and mannerisms. But sadly, that is one of the very few bright aspects of the film, if not the only. This is not the kind of film a sane movie-goer would enjoy in theatres this Sankranti season, or any other time for that case.

Watch or Not?: If you read our review thoroughly, you would know the answer to this question already.

Alludu Adhurs marks the coming together of Bellamkonda Srinivas and Santosh Srinivas who are in need of a solid commercial hit. The film was...
Read more
Movie News

Amitabh Bachchan shares a funny take about Indian cricketers and their daughters!

Versatile Bollywood actor Amitabh Bachchan has shared a funny take on the Indian cricketers and their daughters. He took to twitter to highlight the...
Read more

KCR puts aside plans of KTR as CM for now!

A lot has been said about KTR becoming the Chief Minister of the state of Telangana, as KCR's health has not been the best...
Read more
Political News

The debt burden on the state of Andhra Pradesh continues to rise. In the 20 months since YSRCP came to power, it has incurred...
Read more
Political News

Tensions were high in the city as BJP activists called for a protest against the police baton charge. In this context, Telangana state BJP president...
Read more
Political News

Former minister Akhilapriya has been remanded in custody for three days in connection with the Boinapally kidnapping case. She was reportedly questioned 300 questions...
Read more
Political News

Janasena criticized the Jagan govt that no progress has been made in the Ramathirtham case so far, even though weeks have passed. Against this backdrop,...
Read more

KCR puts aside plans of KTR as CM for now!

A lot has been said about KTR becoming the Chief Minister of the state of Telangana, as KCR's health has not been the best...
Read more
Movie News

Alludu Adhurs marks the coming together of Bellamkonda Srinivas and Santosh Srinivas who are in need of a solid commercial hit. The film was...
Read more
General News

The increasing demand amid short stockpile of COVID-19 immunization dosages across most parts of the world has triggered worries to the crowd due to...
Read more