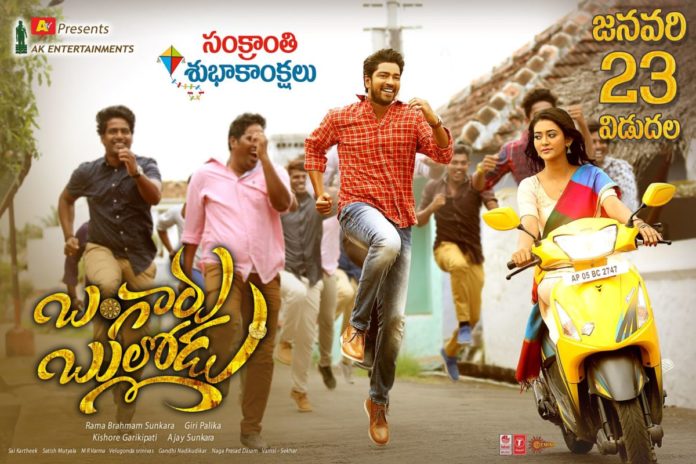 Allari Naresh promised to act only in content-driven films after he attained good appreciation for his role in Maharshi. His latest film, Bangaaru Bullodu released today and let us see what it has to offer.

Story: Bhavani Prasad (Allari Naresh) works as a gold loan appraiser at a local bank and he is fed up with the fact that he is not getting married despite his desperate attempts to enter the wedlock. He later comes to know that there is mythical reason behind his seemingly never-ending bachelorhood. He finds out that his grandfather (Tanikella Bharani)’s wrongdoings to their village’s local deity are acting against his cause. The rest of the story unveils the struggles faced by Bhavani Prasad and the way in which he sets things right in order to find his life partner.

Allari Naresh has been playing comical roles all his career and it is only common for the audience to expect him to tickle the funny bone with his latest outing, Bangaru Bullodu. But that is not the case. Naresh plays an atypical role in the film and he is shown as an earnest man. He has more emotional scenes than comical ones. He does well in this serious role. Pooja Jhaveri looks decent in certain scenes but as a whole, she fails to carry the role efficiently. Vennela Kishore played a brief role but fails to create the desired impact. Prudhvi Raj, Prabhas Sreenu, Posani Krishnamurali, and a few other senior actors are in the movie for namesake. Their roles were poorly written and they offer very little value.

Speaking at a promotional event, Allari Naresh said most of his recent films have good comedy but lack a proper storyline and he is hoping to amend the same with Bangaru Bullodu. As he said, Bangaru Bullodu has a good storyline and emotional connect but things go horribly wrong when it comes to execution. The director fails to balance the story and Allari Naresh’s image as a comedy star. Movie-goers who come to the movie expecting comedy will be disappointed to a great extent. The screenplay is least bit engaging and so is the narrative. The comedy track in the second half replicates a Jabardast skit. Well, people can watch scenes like these on YouTube, they don’t need to pay the ticket price and risk Covid-19 transmission to come to theatres watch them.

The cinematographer Satish Mutyala captures the essence of village environment very well. He does a fine job behind the lens. Editing is shabby as the scenes are way too incoherent, let alone engaging.

Verdict: The film is 129 minutes long but it fails to hold the attention of the audience even for a single minute and that pretty much sums it up. One might wonder if this is actually Allari Naresh’s film, owing to the lack of comedy. It fails in almost all the aspects. A TEDIOUS watch.

Watch or Not: A Big NO

Nothing worked in the second half of the film except Swati Mutyapu Jallulalo song. Fans expect Allari Naresh’s film as a fun ride film, but this film turned out as a bore ride for his fans & audience too!

12.45 P.M: Movie finished with a happy ending and an usual routine climax!

12.20 P.M: Trying to involve a lot of tracks but nothing is impressive. And there’s no fun. The film is going on in a very low pace. And Swati mutyapu jallulalo song picturization is good.

12.00 P.M: Second half is going on in the same way. The director tried to evoke forcible comedy with Getup Seenu’s lady getup and Posani Krishna Murali’s comedy scenes.

Movie started with an emotional touch. Allari Naresh’s mark comedy is missing and except Vennela Kishore episode, there’s no comedy in the film. The movie’s interval twist is good. Let’s wait and see how the 2nd half will be!

11.25 A.M: Sudden twist with simple suspense in the movie! And now it’s time for an interval

10.55 A.M: 30 minutes into the movie. The film is going in a serious way. Allari Naresh fans expect comedy, but there’s no comedy scenes so far..

The Enforcement Department has raided the houses of those who are part of the ESI scam. Since this morning, the ED has conducted raids...
Read more
Political News

Mythri Movie Makers have lined up a series of highly interesting projects and they are showing no signs of slowing down yet. They are...
Read more
Political News

The Enforcement Department has raided the houses of those who are part of the ESI scam. Since this morning, the ED has conducted raids...
Read more
Movie News

The YSRCP government has reportedly asked many of its branch offices to vacate their rental offices, and move into government offices, wherever there is...
Read more