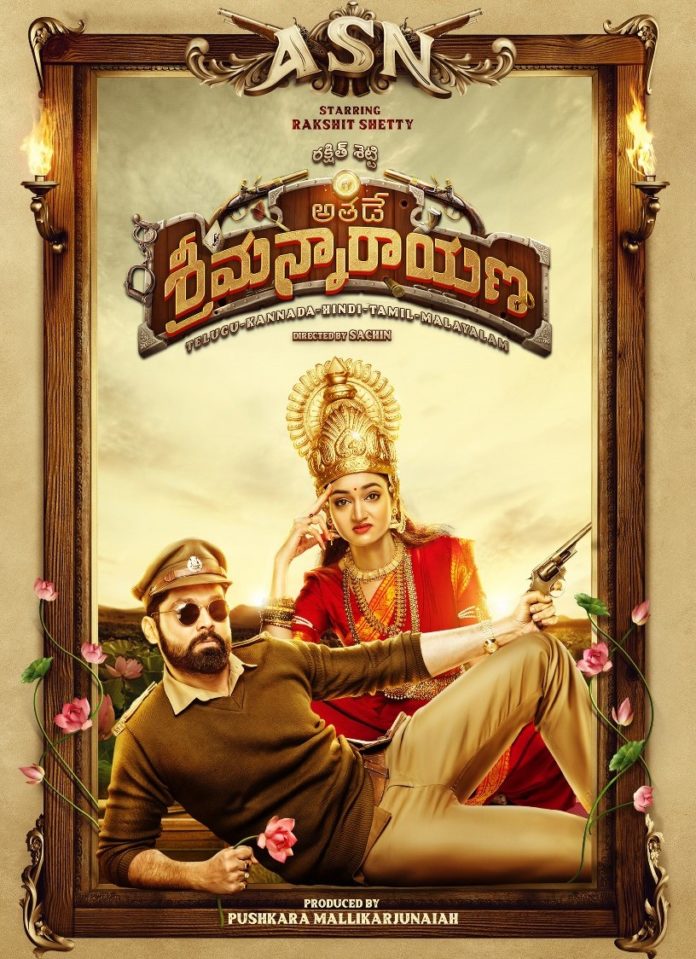 Adheeras, a thieves gang in Amaravati for which the leader is Rama Raju (Madhu Sudan) aim to steal a huge treasure. They kill others who attempt to do the same. But a drama company steals all the treasure and hides it in some other place. Rama Raju fails to know that hidden place even after killing the drama company people.

Rakshit Shetty is the show stealer. He came up with a brilliant performance throughout. His character in the film reminds one of Johnny Depp’s character from Pirates of the Carribean. Shanvi had got a meaty role and she did a decent job. Achyuth Kumar is okay in the role he was offered.

Balaji Mohan, Pramod Shetty and Madhu Sudan Rao played the antagonist roles. Balaji Mohan deserves a special mention for his brilliant performance. Madhu Sudan’s role is limited and his performance is good for the screen space he was offered. Even rest other artists delivered a decent job.

Hero introduction scene and other elevation shots in the first half are decent. The kind of strategies hero comes up with are impressive. The interval bang raises the expectations. The treasure hunt point that holds all the attention of the film is handled well. The way artists attempt to find clues and move forward to get the treasure is good. The climax is shot well and even the fights are impressive.

The makers tried to attempt a treasure hunt based film linking it with Puranas. But audiences who got habituated to watch a typical format in a treasure hunt-based film may find Athade Srimannarayana different. The way the hero and gang finds treasure appears too casual with not many hurdles. This makes the film appear slow and boring. A bad screenplay can be felt in the second half with too many unwanted scenes.

Sachin Ravi’s direction is good. As he even handled editing, he delivered a top notch quality in the editing techniques. But from the editing point of view, he could have easily chopped off several scenes and make it crispy to make the content appear better.

Cinematography can be considered as the biggest highlight of Srimannarayana. Impressive color format in the vintage look is good to watch on screen. D.O.P Karm Chawla deserves a big cake in the success of Athade Srimannarayana.

Two songs and background score are top notch. As most of the technical team is young,  be it any craft, the film can be termed as a masterpiece on the technical side. Production values are lavish. With a budget of Rs. 35 crores, the makers are successful in giving the film a look worth Rs. 100 crores.

Athade Srimannarayana was anticipated to be another promising film from Kannada after KGF. But though the film nailed on its technical side, it failed to engage the audience due to the slow narration.

The makers managed to handle the first half with some good elevation episodes, introduction scenes and notable interval bang, but struggled to keep up the mark in the second half. As the hero’s character resembles Johnny Depp’s character, it evokes some laughs in parts. But the fun part could still appear low for the typical movie lovers.

Overall, the film is an average flick for Telugu audience. If the viewer is not concerned about the duration and is keen to watch some commercial stuff, Athade Srimannarayana may be the best fit for them. But the film can still act as a good guide for the new age filmmakers.

1:51 PM: Climax fight has been shot in a stylish manner with beautiful visuals.

1:37 PM: Finally srimannarayana found the treasure place. The film is moving towards the climax.

12:58 PM: Srimannarana finally gets a clue. Some drama scenes are happening before treasure hunt.

12:44 PM: Srimannarayana’s intelligent play to get treasure map is superb.

12:33 PM: Second half started with Srimannarayana escaping from Shanvi gang.

First Half Report: Athade Srimannarayaana opens up to terrific visuals. The film runs on a treasure hunt backdrop. The entire set up looks fresh. A few blocks like hero introduction, fights and even interval block appear impressive. But the narration is slow. The real treasure hunt drama is expected to come out in the second half.

11:53 AM: Srimannarayana started investigation on treasure. Narrating flashback with an interesting picturization.

11:46 AM: Finally Ramaraju and Srimannarayana meeting scenes are happening.

11:37 AM: A funny fight is happening between Srimannarayana and Ramaraju gang.

11:31 AM: Ramaraju is present Abheera. Opposite gang’s head Tukaram locked Srimannarayana. 4 days countdown for treasure has been started.

11:09 AM: Rakshit Shetty introduced as Srimannarayana, a police officer. The action episode has been shot in a stylish manner.

11:06 AM: Shanti Srivatsava introduced as a TV anchor Lakshmi.

11:01 AM: Abheera gang finding for missing treasure. Some family drama scenes are happening.

10:58 AM: Madhusudhan as Rama. His team call him as Abheera. He is the leader of a thieves gang.

10:50 AM: Its show time for Rakshit Shetty’s Adventurous film Athade Srimannarayana with 186mins and ‘U/A’ certified.

Regional cinema is evolving. More pan Indian movies are coming from regional movies especially South India. From Telugu, we have seen films like Baahubali, Saaho and Syeraa. At the same time, Kannada cinema too is not lagging behind. We have seen the insane KGF which made action lovers drool over the cinema. Now the second part of this movie is in making and Sudeep’s Pailwaan was also released in many languages but unfortunately it failed to live up to the expectations. Now time has come for the third Pan Indian movie from Kannada titled Athade Srimannarayana in Telugu.

The Kannada version, Avane Srimannarayana got released on December 27th. Telugu version is going to release on January 1st, 2020. Tamil version will release on January 3rd and Hindi version will hit the screens on January 17th. Theatrical trailer of the film has impressed one and all. Makers have cut the trailer with over 4 minutes and by looking at it, one can say that it is not a regular kind of movie that we are accustomed to.

Now have a look at what the Kannada critics have to say about the movie. Avane Srimannarayana has got positive start at the box office. While the movie has its share of flaws, critics have praised the new age film making, film makers’ craziness and the new sounds that are used in back ground. Most of them termed Avane Srimannarayana as an unique experiment in Sandalwood.

Coming to the hero, Rakshit Shetty steals the show is what most of the reviews are saying. There are other actors like Achyuth Kumar, Shanvi Srivastava, Pramod Shetty and Balaji Manohar who have done justice to this witty and bizzare action entertainer. Sachin Ravi has directed the film and he has been getting many accolades. Producers should also be appreciated in making such a crazy and insane entertainer which is very new to us.

With Kannada people’s reaction is very positive too, we have to wait and see how Telugu audience will embrace the film on Jan 1st, 2020.

It is known that Nitro Star Sudheer Babu has teamed up with director Mahesh for his upcoming film, which is titled 'Hunt'. Produced by...
Read more
Rakshith Shetty's "Athade Srimannarayana" Movie ReviewTelugubulletin.com Rating: 2.5/5 Story: Adheeras, a thieves gang in Amaravati for which the leader is Rama Raju (Madhu Sudan) aim to steal a huge treasure. They kill others who attempt to do the same. But a drama company steals all the treasure and hides it in...