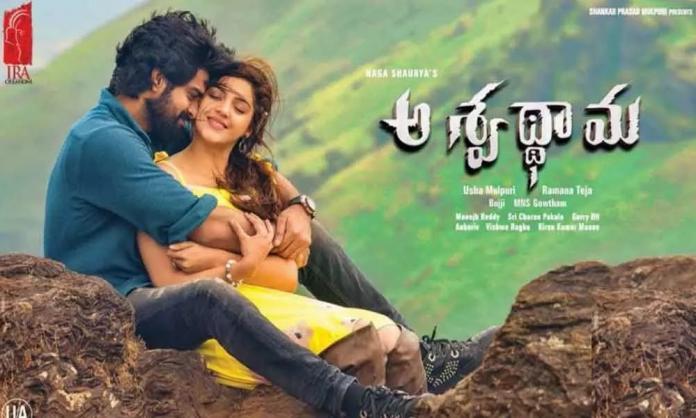 Naga Shaurya has been looking to come out of the lover boy image. He is coming up with an action thriller genre movie to try his luck with a tough look. The complete U/A certificate thriller hits screens today. Let us have a look at the review and see if he succeeded to change his image as an action hero.

Gana (Naga Shaurya) comes from USA for his sister’s engagement learns that she is pregnant. However how she got pregnant is the mystery that Gana wants to chase. The story takes twists and turns as Gana starts investigating who is the reason behind his sister’s abuse and many others. Gana finds a major clue when his girl friend’s friend gets abducted. The main antagonist and the reason behind the serial rapes gets reveled in the beginning of the later half of the movie, Dr Manoj Kumar (Jisshu Sengupta). The rest of the story is about how the doctor does the crime, reasons behind it and how Gana chases the mystery and takes his revenge.

Naga Shaurya made an honest attempt to portray him self as an action hero in this Thriller genre flick. At times his action may seem a bit rustic but overall he managed to excel in high octane action sequences and few emotional scenes. Mehreen plays girl friend role which is no different from any other movie. One would think that she has a huge opportunity to improve her acting skills. Jisshu Sengupta who appears in second half steals the show, makers kept him as a secret until the release. He portrayed the role of  psychotic Pathologist, his acting skills are commendable and overall a plus to the movie. The dubbing voice for Jisshu is apt.

Ghibran’s bgm is good and a movie like this demands such score. The score that he gave for interval bang and the port sequence that comes in the second half is good. Sricharan Pakala music is average with 3 songs that one may feel unnecessary in the movie. Anal Arasu the stunt choreographers did a fabulous job, however such high octane action sequences does not fit in this mystery plot. Manojh Reddy did a decent job with his lens. Editor Garry’s work is good. The debutant director Ramana Teja did a decent job for a first time director, however he is not able to captivate the audience where screenplay plays big role in such genres. Action hero wannabe Naga Shaurya himself penned the story which is wafer thin.

Pre climax and the climax episode

Naga Shaurya proves himself that he can handle action movies with Aswathama. An action thriller enthusiast might like the movie because of Naga Shaurya’s action episodes and Jushhu’s performance, but it might not to be the likes of a normal movie goer as it lacks emotional connect and basic entertainment elements.

Immediate reaction at end credits: Better second half, First half could have been much better. Lacks something in this mystery drama.

Watch or Not?: Only for thriller genre lovers

No biggies after Sankranthi season might help with openings. It will not cater to the likes all sects of audience. Might be limited to multiplexes and A theaters given the genre.

Note: Our Boxoffice prediction is not just based on our rating, but also on various factors like release season, hero stardom and craze of the movie.

7:18 pm: Movie comes to an end with Naga Shourya killing the serial rapist.. Stay tuned for the full review on Telugubulletin.com

7:16 pm: Why the Villain does what he does was shown in a good way from Villains perspective..

7:07 pm: Finally an interesting scene where the Villain makes hero come to the port..Movie enters into Climax mode now

7:04 pm: Hero goes to an address and finds the Villain. He identifies him as DrManoj who did the autopsy of the dead girl. Hero doesn’t know that the Pathologist is the guy who is the serial rapist.

6:57 pm: Spoiler Alert – Villain is a Pathologist, who does autopsies of only women dead bodies.. Movie continues in the same tempo and story doesn’t progress much

6:47 pm: Now a big business man’s daughter goes missing and she is found dead in front of a police station.. Movie now drops to below average.. Scenes are not engaging

6:35 pm: Villain’s characterization is peculiar and Sadistic. Movie is average till now..

6:33 pm: Director reveals the Villian but why he does these deeds is not yet revealed..The middle men who helped the Villian kidnapping the girls, gets killed by the Villian as they all got exposed.

6:25 pm: First half of the movie is Average except for the last 15 min before the interval block. It is all about chasing the mystery. Second half starts with introduction of two new characters. One guy getting pleasure from a female corpse

6:18 pm: Scene where hero chases ambulances to find the girl is good with nice background music, followed by interval block

6:08 pm: Naga Shourya finds more clues on how this is happening with other girls..

5:55 pm: In the process, Naga Shourya beats everyone who tried to flirt with her in the college. He finds out that same thing happened with another girl..Fights are well choreographed by leading scenes are not so interesting

5:40 pm: Naga Shourya founds out that his sister is pregnant and she doesn’t know how it happened. She gets it aborted, but how it happened remains mystery

5:27 pm: Naga Shourya’s intro in an airport, followed by his sister’s engagement

5:25 pm: Scene where a random girl gets kidnapped by the goons was shot in an interesting way.

5:20 pm: Nagashourya is shown as a Kid while his mother giving birth to his baby sister

5:15 pm: Movie starts with Pawan Kalyan’s voice over in the background and Gopala Gopala dailogs.

Naga Shaurya has been looking for a hit from some time as after Chalo, films likes Kanam, Ammamma Garillu and Narthanashala flopped big time. So he took some time off, taken a break, wrote the story himself and decided to produce the flick in his own banner. That’s how Aswathama happened. Debutante Ramana Teja has directed the flick. Teaser, Theatrical trailer of the film raised the rights expectations on the film. Aswathama is all about how a brother comes to the rescue of his sister and in the process how he uncovers a whole women trafficking mafia.

Action sequences and technical details are said to be top notch for this movie. Aswathama has cleared the censor and has been given U/A with no cuts. Mehreen has played the female lead in the movie. Sri Charan Pakala has composed the music. The film is produced by Ira Creations.

We at Telugubulletin has been covering the live updates of the film and bringing out the review first on the net. So all the Naga Shaurya fans, stay tuned to us.