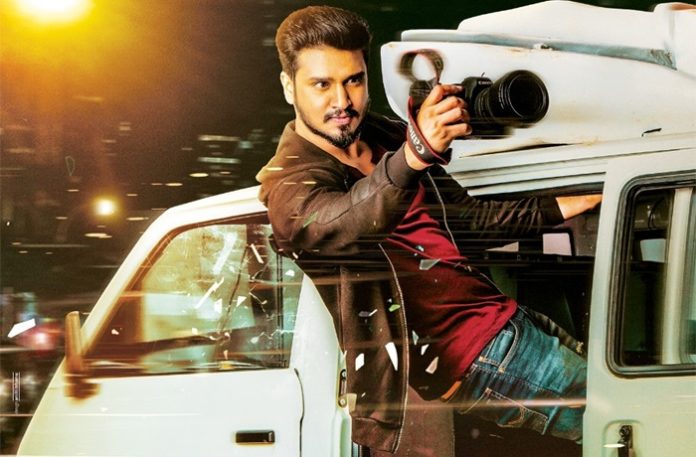 Arjun Suravaram (Nikhil Siddhartha) is a reporter working for tv99 news channel. He falls in love with Kavya (Lavanya Tripathi). One fine day, he gets selected for BBC channel. But meanwhile, in a dramatic situation he gets arrested in a crime. What exactly is the crime about and how hero got involved in it. What are the consequences he faced and how did he come out of it? The answers for all the questions form the crux of Arjun Suravaram.

Nikhil came up with a brilliant performance throughout. He picked up well in fights and dances. Lavanya Tripathi is decent in the role she was offered. She is glamorous in one of the songs. Tarun Arora as main villain is good. Vennela Kishore and Satya evoke few laughs in parts. The emotional scenes between Posani and Nagineedu are decent.

The story picks up interest when Nikhil gets arrested in a crime. About 25 minutes before the interval is the key slot of Arjun Suravaram film. The scenes that prove Nikhil’s crime and pre climax episodes are the highlights of the second half. Art work is top notch and locations are perfect. The crime point picked for the crux is great. The BGMs of Sam CS elevates several scenes in the film.

The director tried to add few commercial elements here and there, which made Nikhil’s performance in such arena dull. Lavanya’s character has no great significance. The first 30 minutes appear boring and the interval block is good. The second half starts on a slow note and moves in the similar manner for about 30 minutes. The director tried to adopt commercial formula in the climax, with some unnecessary chases. He tried to use the sequences only for the hero elevations.

Arjun Suravaram is the remake of Kollywood super hit movie Kanithan. Though the same director has been picked for the original version too, he could not make the Telugu version as effective as the Tamil one. Though the main point is interesting, the way the scenes are treated appear too predictable.

Cinematography is just okay and the quality of visuals appear too low. DI coloring is also unimpressive. Adding to it, graphics have been used at several places in the film, which literally test the patience of the audience watching the film. Production designing is not great and so the editing.

Arjun Suravaram that hit the theaters after numerous delays has been anticipated to be a thorough entertainer. But it seems, the makers followed 1:4 ratio, where one scene appears good and the following four scenes appear boring. Though the point is good, the way it was narrated is too old. Adding to it, even entertainment is too low. Arjun Suravaram may impress those who watch routine and predictable films. Others may not find it much interesting.

The interesting interval block raises good expectations on the film. But the second half starts on a dull note. The crime revelation episode in the pre climax is good, but the climax appear too commercial. Not more than 20 minutes is interesting in the entire second half.

11:23 AM: With the support of all the media channels, Arjun wins the game. He exposed the biggest crime syndicate. The movie takes a happy ending.

11:09 AM: Posani-Vennela Kishore emotional block gives an emotional touch to film and it leads to climax.

10:40 AM: One on one investigation going on from the sides of hero and villain. Arjun waiting for a lead.

10:33 AM: An emotional conflict between Arjun and his father.

10:22 AM: Second half started. Villain aims to nab Arjun now.

The first 30 minutes of Arjun Suravaram has nothing much to discuss. It starts on a low note and picks up the pace when hero gets arrested. The emotional blocks after his arrest and the way Arjun tries to solve his case and a chase scene before the interval are the major highlights of the first half. The last 20 minutes before the interval develops good curiosity with the numerous engaging episodes. Second half is expected to be interesting with some cat and rat type fight between hero and villain.

10:03 AM: A chasing scene is shot well. It gives a high feel. A good interval block.

09:37 AM: Arjun’s crime proved and he was sentenced to 6 years of imprisonment.

09:32 AM: Twist in the tale. Arjun along with several other students get arrested in a certificate forgery case. Story turns interesting now.

09:29 AM: It’s time for a duet song ‘kanne kanne report veste’ between Nikhil and Lavanya. Lavish out door visuals and Nikhil’s impressive dance moves along with Lavanya’s glamor are the highlights of the song.

09:25 AM: Arjun’s BBC interview scene has some heroic elevations. The scene is good.

09:15 AM: Vennela Kishore tried to best to evoke laughs in live debate scene. But its average.

09:09 AM: Time for hero introduction song ‘Tikamaka’. It is shot in a news backdrop.

09:00 AM: Nagineedu is Dooradarshan reader and Pragathi is his wife. They both are Arjun’s parents.