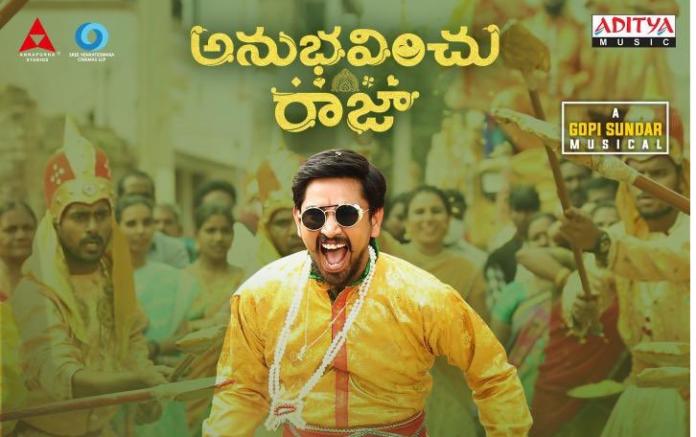 Raj Tharun is badly in need of solid commercial success. He is pinning high hopes on Anubhavinchu Raja, which hit the silver screens today. Here’s our review of the film.

Raj Tharun is in his element as he plays a happy-go-lucky guy who finds himself in tricky situations for petty reasons. He delivers a fine performance. Kashish Khan is seen as Raj Tharun’s love interest and she comes up with an impressive performance. She is a good performer. Ajay, Sudharshan, and the rest of the star cast deliver what is expected of them.

Srinivas Gavireddy made his mark with Anubavinchu Raja. He picks an entertaining plot that has good scope for situational comedy. The opening half is breezy. The love track between the lead pair is engaging enough.

The scenes related to Raj Tharun running for the village president post and his witty efforts to land the same are dealt with in an entertaining manner. But comparatively, the second half is low on entertainment quotient. With more comedy quotient, the film would have made for a better watch. The narrative falls apart towards the end as the climax is rushed.

The background score and music are of good quality. The cinematography is impressive. Editing is neat. The production values are good.

Verdict: Anubhavinchu Raja is an entertaining comedy drama that banks on situational comedy. The opening half is breezy. But the latter half lacks in entertainment quotient. The climax is rushed. Nevertheless, the film makes for a good watch.

Anubhavinchu Raja is an upcoming romantic comedy film written and directed by Srinivas Gavireddy. It is produced by Supriya Yarlagadda under Annapurna Studios. It stars Rajtarun, Ajay, Posani krishna Murali. The music is composed by Gopi Sunder.

Watch this Space for US Premiere Show Live Updates.

07.55 A.M: Raj Tarun works as a Security gaurd at the same IT company where heroine also works. Someone hires contract killers to kill Raj Tarun.

08.25 A.M: Kashish Khan feels mad after knowing that Raj Tarun is not an IT guy. Movie takes a break with nice interval twist.

08.40 A.M: Second half of the movie starts with Raj Tharun’s background as rich guy in the village. Ajay is another guy from the same village. Raj Tarun wins Kodi pandem followed by Anubavinchu Raja song, which is a good watch.

08.50 A.M: Raj Tarun runs for president elections in his village. He hires goons to gain good will and get votes.

09.10 A.M: Real goons show up and they kill Raj Tarun’s friend. That’s the reason Raj Tarun moves to city so that he can find out who killed his friend Rahul.

09.30 A.M: Raj Tarun find out who is the real murdered. He takes Ajay’s help to confirm his findings. Movie ends with a rushed climax.

For the past couple of days, we have been hearing that Jr NTR and Mahesh Babu will be attending the grand success meet event...
Read more
Movie News

The makers of Ravi Teja's Ramarao On Duty have announced that a massive update on the project will be out tomorrow. Now, we are exclusively...
Read more

The ruling YSRCP created a huge state of unrest in the state of Andhra Pradesh after Chief Minister YS Jagan Mohan Reddy announced his...
Read more

For the past couple of days, we have been hearing that Jr NTR and Mahesh Babu will be attending the grand success meet event...
Read more
Political News