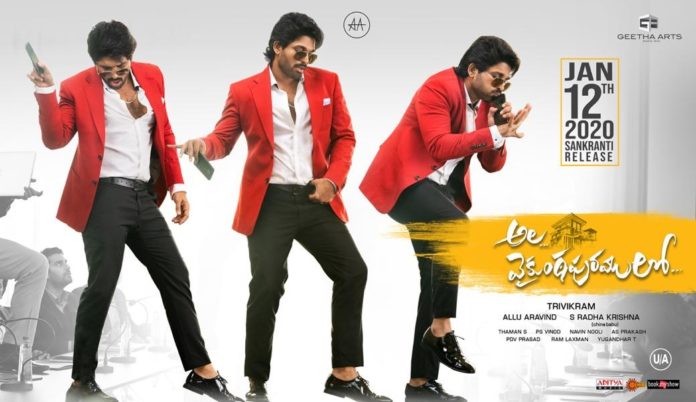 Stylish Star Allu Arjun and Trivikram Srinivas have earlier delivered hits like Julai and S/o Satyamurthy. Their third collaboration Ala Vaikunthapurramulo has created a lot of buzz before the release, thanks to the super hit songs. The film releases amidst huge competition at the box office today. Here is the Ala Vaikunthapurramulo review.

Valmiki (Murali Sharma) hates his child Bantu (Allu Arjun). In fact he is more interested in his boss’s son Sushanth. (You can guess the reason behind this by watching teaser and trailer). Bantu joins a tourism office and falls in love with his boss Pooja Hegde. When everything goes well for them, Rama Chandra (Jayaram) father of Sushanth enters the scene and changes the whole scenario. As a result of villain Samuthirakhani actions, one things leads to the other and Bantu comes to know a hard hitting truth which his father has been hiding from him. Now, Bantu decides to enter Vaikunthapuram, which his dad has prohibited for him.

What happens after he enters the Vaikunthapuram. Why Valmiki hates Bantu. What truth did Bantu finds out. What happens next forms the crux of the story.

Allu Arjun has excelled in the role of Bantu. From his frustration when his dad hates him to the maturity he shows in the climax, Allu Arjun has got a role of mixed emotions and he suited the role to the T. His dances are simple yet stylish. He is equally good in comedy scenes and emotional scenes. His chemistry with Pooja Hegde is good to see on-screen. Heroine Pooja Hegde, like most of Trivikram Srinivas’s films has got nothing much to offer. Love scenes with Allu Arjun are cool and breezy. Apart from that there is nothing much for her. Sushanth has got very few dialogues in the movie and there is no scope for him to perform.

Murali Sharma as a over-greedy father is highlight of the film. His role is key and he performed in a excellent manner. Jayaram role has some substance. He is good towards the end of the movie. Sachin impresses too. Sunil is wasted. Harshavardhan is OK. Nivetha Pethuraj hasn’t got much to perform either. Tabu is fine. Her own dubbing is impressive. Others have done justice to their roles.

Cinematography is excellent. Every frame looks visually appealing. Songs are shot so well. Samajavaragamana and Butta Bomma stands out. Songs by Thaman are extra-ordinary and goes well with the flow. His BGM needs special mention. Overall, Thaman’s 100 percent effort takes the movie to next level. Editing is fine but could have been better. Dialogues are mention worthy. Apart from the dialogues released so far, there are few other which will hook us. Production values are top notch.

Trivikram Srinivas has once again took a story with family values and narrated it in his own style. Though the movie goes well, we will have a feeling that it is already dealt by the director. His narration is not new and goes within his formula. But he made sure that audiences will stick to the point with his strength of writing.

Songs and their picturization

Before concluding Ala Vaikunthapurramulo review, Trivikram in one of his interviews explained the theme of this film. “We can give certain place to one person but we cannot give status to that person. It is him/her who have to earn it by themselves”. However, by watching the cinema and not watching the interview we cannot get what Trivikram Srinivas’s actual point is. He played around the bush again without dealing it directly. It might work against the film. But again it is Trivikram Srinivas’s writing and technical brilliance plus top notch performances from lead actors comes in aid for him. While the first half is passable, second half is emotional and humorous.

Immediate reaction at end credits: Its better than first half with comedy, action and family drama. It feels like a perfect family entertainer. Feels a couple of scenes a bit dragged

Watch or Not?: Yes but the narration is complete class.

Ala Vaikunthapurramulo plays to the strengths of Trivikram Srinivas and Allu Arjun. The film has very less dull moments and is passable for most of the time. Though there are less high points, family audience will like the film as it is a passable family entertainer. Sankranthi season might help the film a lot as family audience first choice will be Ala Vaikunthapurramulo. It has high chances of being ending up as a hit.

Ala Vaikunthapuramulo is another Trivikram mark entertainer. Comedy is the main strength of the film. Second half turns out to be better than the first half. While the first half is light hearted, second half offers more action. Climax ends on a good note. Review will follow soon.

11:24 PM: Trivikram ends the movie with comedy in his typical style.. The End..

11:15 PM: Another twist regarding Sachin gets revealed. It opens up a new dimension for the movie

11:03 PM: Story takes new turn with Allu Arjun has been thrown out of Vaikunthapuram

10:42 PM: Emotional scene between Tabu and Jayaram feels a bit dragged but it is important storywise. Sachin acting in this scene is very good.

10:35 PM: Story picked up from the point Allu Arjun enters the house. Especially comedy in the house scenes are very good.

10:28 PM: Fight scene where Sachin tries to enter villain’s port is designed in an impressive manner. Allu Arjun is so confident in this scene.

10:15 PM:Vennela Kishore makes his entry as a doctor. Scenes here are hilarious.

10:13 PM: Second half starts off well with good comedy scenes. However, there is undercurrent conflict running between Murali Sharma and Allu Arjun

10:05 PM: First half report: First half of Ala Vaikunthapuramulo is breezy and has some good humour. Songs are picturized very well. Story line is wafer thin and nothing much happens story wise. However, pre interval episode gives some much boost.

10:02 PM: Some emotional scenes leading the way to interval after the twist gets revealed is really nice. Bgm here is excellent. Time for the interval.

09:56 PM: Some interesting twist gets revealed to Allu Arjun. Some movement in the story

09:52 PM: Samuthirakani enters the scene. He stabs Jayaram in a tussle of partnership issue. Allu Arjun and Pooja Hegde saves him

09:49 PM: Time for the third song, Butta Bomma. Shot very impressively. Again the steps are simple and stylish. Flowers setup is nice and brings new flavor to the song.

09:36 PM: Jayaram sees Pooja Hegde in the deal and being impressed wants her to get married to his son.

09:33 PM: As of now Nothing much happening story wise, but light hearted humour is making the things to proceed smoothly.

09:18 PM: Allu Arjun jokes with Pooja Hegde but later finds out that she is his boss. Allu Arjun, Rahul Ramakrishna, Navdeep works in same company.

09:10 PM: Song is picturized in a stylish way. Dance and visuals are impressive.

08:56 PM: 20 years later.. Movie runs down to present scenario.. Time for the kids to get introduced as leads

08:52 PM: Murali Sharma has done the biggest sacrifice as a father but it later comes with a twist

08:49 PM: Murali Sharma’s wife and Tabu are for delivery in the hospital at the same time. Bad news for Tabu and her husband.

08:45 PM: The movie has finally started with 165 minutes run time. This is Ala Vaikunthapuramulo’s world wide first premiere. Movie starts off with Murali Sharma rushing to the hospital.

08:40 PM: US audience are eagerly waiting for Guruji’s film. Theater is full and the Stylish Star fans are making this a celebration.

Ala Vaikuntapurramloo Preview: Here are the major assets of the film

Ala Vaikunthapurramuloo’s audio received an electrifying response from audience. All songs became chart-busters. And the lyrical videos of both Samajavaragamana and Ramuloo Ramulaa have individually created never before track record by gaining over 100 million views on YouTube. Ala Vaikunthapurramuloo has set a unique record by attaining this rare feat. Also, Ramuloo Ramulaa has become the fastest Telugu song to clock 100 million views.

The film’s highlights are said to be the emotional angle, Trivikram mark dialogues, family drama, interval bang, Allu Arjun and Pooja Hegde’s performances and chemistry, visual grandeur and S Thaman’s music and BGM. It looks like Ala Vaikunthapurramloo is going to be a perfect treat for the family audience this Sankranti. And for sure Stylish star is all set to impress all of us with his amazing acting, mind-blowing dance moves.

Saptagiri and Shakalaka Shankar combo will be back again soon says Saptagiri. At one time after Maruthi’s films became hits, their combination rocked and...
Read more
Movie News

Mohan Babu and Vishnu adopts 8 villages in lock down time

Manchu Mohan Babu who is always good at heart has now adopted 8 villages in the Chandragiri constituency which is located in the Chittoor...
Read more
Movie News

When the film Raja Varu Rani Garu released, not many people showed interest, they wrote it off as another small film that will die...
Read more

Saptagiri and Shakalaka Shankar combo will be back again soon says Saptagiri. At one time after Maruthi’s films became hits, their combination rocked and...
Read more
Movie News

Mohan Babu and Vishnu adopts 8 villages in lock down time

Manchu Mohan Babu who is always good at heart has now adopted 8 villages in the Chandragiri constituency which is located in the Chittoor...
Read more
Movie News

When the film Raja Varu Rani Garu released, not many people showed interest, they wrote it off as another small film that will die...
Read more
Movie News

Exclusive: Vishwak Sen’s next with raw and rustic director

Ee Nagaraniki Yemaindi has given us another promising talent in Vishwak Sen Naidu. With Falaknuma Das he had proved that he can fit into...
Read more
Movie News

UV Creations which was owned by Prabhas's friend Vamsi and Pramod is a reputed production house in Tollywood. Starting with Mirchi they have produced...
Read more

Telangana Chief Minister KCR made it clear that even though the coronavirus in the country is under control, hundreds of lives were in danger...
Read more
Political News

KCR conducted a press meet today at 7 PM and the people of Andhra Pradesh are equally interested in this meet along with Telanganites...
Read more
Political News

PM Modi addresses on the occasion of 40th anniversary of BJP

Prime Minister Narendra Modi's initiative to light candles or diyas or flash torchlights at 9 pm on Sunday, could be a strategy to mark...
Read more

Saptagiri and Shakalaka Shankar combo will be back again soon says Saptagiri. At one time after Maruthi’s films became hits, their combination rocked and...
Read more
General News

To fight with the COVID-19 pandemic, the country is looking beyond lockdown and the Modi’s team is coming up with a decent plan. Reportedly,...
Read more
General News

In Andhra Pradesh, we have witnessed the double standards of the media channels and newspapers a number of times. There are evidences where media...
Read more
Photo Gallery