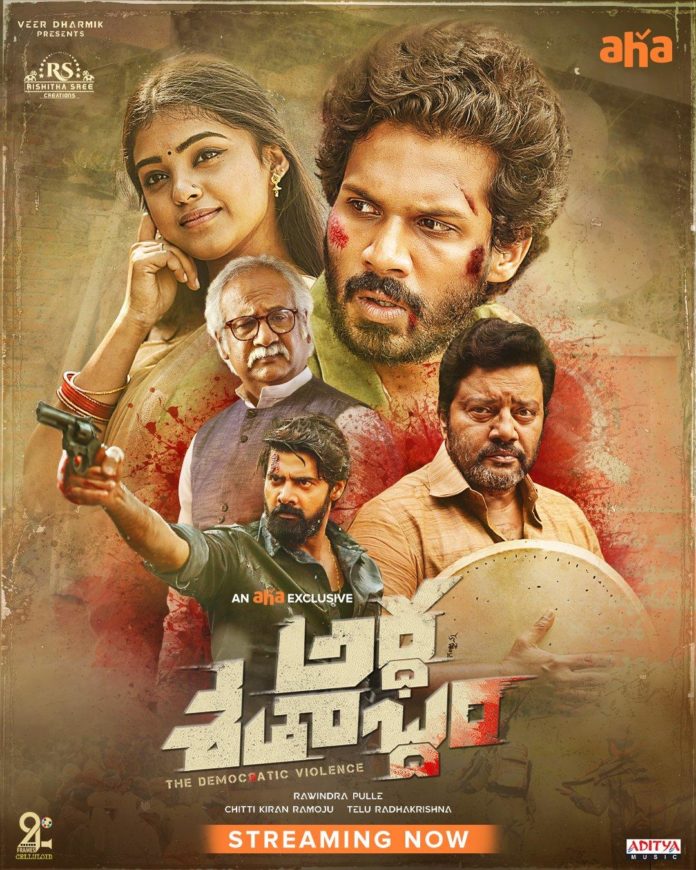 Ardha Shathabdham stars Karthik Rathnam of C/O Kancherapalem and Krishna Priya in the lead roles. The film is directed by Ravindra Pulle and it is available for streaming on Aha Video now. Let us see what it has to offer.

Krishna (Karthik) develops feelings for Pushpa (Krishna Priya) right from a young age. But he struggles to convey his feelings to Pushpa, due to the honour killings culture in the area. One day, Krishna’s friends devise a plan to bring Krishna and Pushpa together and it goes horribly wrong? What is their plan? How does it affect the lives of others? Watch the film to know the answers.

Karthik Rathnam emotes well in the protagonist role and so does Krishna Priya who plays the female lead. Naveen Chandra, Sai Kumar, Ajay, and Subhaleka Sudhakar deliver fine performances but their characters are not established well in the story.

Cinematography is one of the main assets of the film. Thanks to brilliant work from the men behind the lens, Venu, Venkat R Sakhamuri, and Aascar, the film has aesthetic visuals which replicate the 90s era. Music and background score by Saphal Raja are also very impressive. Editing should have been much better. The first half is unnecessarily stretched and the second half is incoherent.

The director Ravindra Pulle picks a tried and tested set-up but gives it his own spin with the honour killings element. His basic idea of projecting the foolishness of commoners even 50 years post independence is good. But he fails to develop this story into a compelling film. The emotional connect is missing right from the opening scene. The screenplay is bland and lackluster as well. He gets the best out of his technical team but that is just about it. His narrative should have been a whole lot better.

Debut director Ravindra Pulle blends caste politics, love drama and action for this rural drama. He succeeds to an extent but the film, as a whole lacks the desired impact. Those who like near-to-life dramas might like the film, but the rest will not find it compelling enough.

Watch or Not? Those who love realistic dramas can give it a try.

The makers of Sree Vishnu's Raja Raja Chora have unveiled the teaser of the film, which looks like a different attempt by the ‎Gaali...
Read more
Movie News

As per latest reports from Bollywood media portals, the makers of Ram Charan and Shankar’s RC15 have locked happening beauty Kiara Advani for the...
Read more
Movie News

Actor Sara Ali Khan has shared her experience when she first met her new half-brother. It is well know that Sara's father, Saif Ali...
Read more

Executive capital of AP will be shifted to Vizag soon: Vijaysai Reddy

YCP MP Vijayasaireddy said that the executive capital of Andhra Pradesh will be shifted to Visakhapatnam very soon. Speaking to the media, he said...
Read more
Political News

The Maoists have outraged over CM Jagan's rule in AP through a letter. Recently, they have released a letter in the name of Ganesh...
Read more
Political News

The Dalit communities in AP, especially in Kostha Andhra are opposing the appointment of YCP leader Thota Trimurthulu as an MLC under the Governor's...
Read more
Political News

The by-elections for the Huzurabad constituency have become the talk of the town, and the most interesting aspect in Telangana politics right now, way...
Read more

The makers of Sree Vishnu's Raja Raja Chora have unveiled the teaser of the film, which looks like a different attempt by the ‎Gaali...
Read more
General News

In the recent times, the Kumbh Mela drew flak among none-Hindus and atheists who condemned it with a presupposition that it could be a...
Read more
Movie News

As per latest reports from Bollywood media portals, the makers of Ram Charan and Shankar’s RC15 have locked happening beauty Kiara Advani for the...
Read more