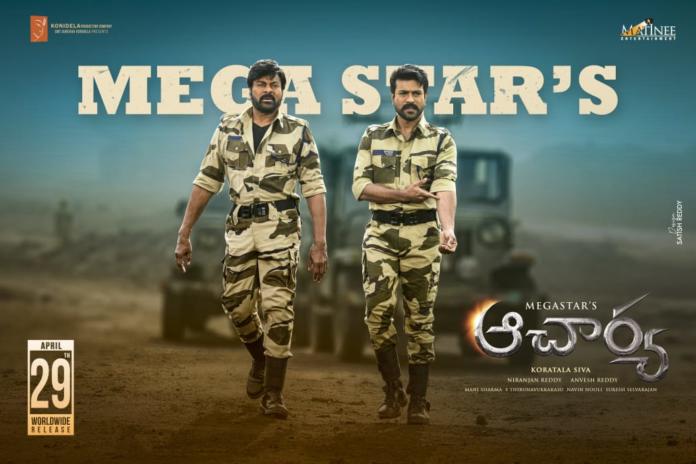 Megastar Chiranjeevi and Ram Charan’s social drama, Acharya is carrying high expectations among the fans. Written and directed by Koratala Siva, the film has hit the screens today. Let’s see how it is.

Set in Dharmasthali backdrop, the film revolves around the life of people from a place named Sidhhavanam. What is the interconnection between Dharmasthali and Siddhavanam? How will a politically influencing personality named Basava( Sonu Sood) dominates Dharmasthali? Why will Chiranjeevi’s character enter Dharmasthali? What is his backstory and connection with Siddha’s ( Ram Charan) role, form the crucial crux of the film.

Fans will like the combination scenes between Chiranjeevi and Charan for obvious reasons. The star father-son duo are just amazing on screen in a single frame. Pooja Hegde is cute in her traditional look as Charan’s love interest. Her chemistry with Charan adds a fresh vibe to the screen.

Sonu Sood and Jisshu Sen Gupta are decent in their negative shaded roles. Other supporting artists are fine in their respective roles.

Director Koratala Siva is back with a social drama that has a weak script and dull presentation. Considering Koratala’s track record, everyone expects a minimum grantee film but the director disappoints big-time with his outdated story and screenplay. Though the film has two stars, it lacks proper high moments which is an example to say about the poor direction skills of Koratala Siva.

Music by Mani Sharma is okay but definitely not as expected. While all the songs are just passable, the background score is not that great compared to Mani Sharma’s capabilities.
The cinematography by Thiru is superb as he showcased the entire film, especially the Dharmasthali set with a proper lighting setup. Editing by Naveen Nooli fails to register.
Production values for this high budget film are good.

In an overview, Acharya is a serious social drama that has a weak storyline and 90s style presentation. Though Chiranjeevi and Charan tried to bring life to the proceedings with their screen presence, the non-commercial approach of Koratala makes Acharya an unworthy watch this weekend.

Acharya is an action thriller film written and directed by Koratala Siva. It is produced by Matinee Entertainment and Konidela Production Company. The film stars Chiranjeevi, Ram Charan, and Pooja Hegde. It features music composed by Mani Sharma with cinematography by Tirru.

Watch this space for the live updates of the movie from 12:30 AM

12:40 AM IST – Movie starts with Mahesh Babu’s voice over about Dharmasthali

1:00 AM IST – Dharmastali’s people fight with atrocities done by Basava (Sonu Sood). First fight of the movie is complete, it’s an average fight.

1:20 AM IST – Chiru steps in Chaana Kastam songs are simple and graceful, appeals to fans and masses.

First half Report:  Acharya’s first half does not offer much to the common audience, an item song and pre interval scenes might appeal to fans.

1:45 AM IST – Neelambari song with Pooja Hedge is a watchable one, Charan dances with ease. It’s an eye feast.

2:00 AM IST- Backstory of Sonusood and Ram Charan. Ram Charan gets saved by Naxals and he joins them.

Final Report : Movie does not live up to the expectations. It does not cater to fans except Chiru Charan combo scenes, bhale banjara song, Nilambari song.  Koratala Siva chose a very weak, old formula script with two big stars and delivered an unimpressive narrative.

After scoring a massive hit with SS Rajamouli, Jr NTR is gearing up to stun the audience with two big-ticket films- NTR 30 with...
Read more
Movie News

Universal hero Kamal Haasan’s Vikram, directed by Lokesh Kanagaraj, is one of the most awaited movies of the year. The film produced by Kamal...
Read more
Movie News

Disney Plus HotStar goes "Bhala Thandhanana" on the audience! From the makers of Oohalu Gusagusalaade and Eega, comes yet another gem of a film, Bhala...
Read more
Movie News

Nandamuri Taraka Rama Rao Jr, popularly known as Jr NTR or Tarak, is celebrating his 39th birthday today and wishes have been pouring in...
Read more

Jagan’s blatant disrespect for TFI clear through these actors

Ahead of the 2019 elections, a slew of actors decided that they would be supporting YS Jagan Mohan Reddy, and after he became the...
Read more
Political News

Jagan voted as the best CM – a PR stunt?

After scoring a massive hit with SS Rajamouli, Jr NTR is gearing up to stun the audience with two big-ticket films- NTR 30 with...
Read more
Political News

Universal hero Kamal Haasan’s Vikram, directed by Lokesh Kanagaraj, is one of the most awaited movies of the year. The film produced by Kamal...
Read more
Movie News

Disney Plus HotStar goes "Bhala Thandhanana" on the audience! From the makers of Oohalu Gusagusalaade and Eega, comes yet another gem of a film, Bhala...
Read more