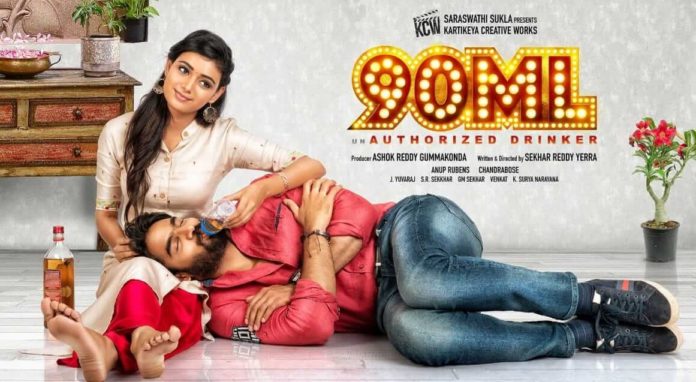 Hero Karthikeya created sensation with the movie RX 100. The movie went onto become blockbuster hit bringing immense craze for Karthikeya. However, the actor failed to grab the craze in his favour by selecting wrong scripts. After back to back flops, Karthikeya is back with an interesting backdrop 90ML. The hero pinned all his hopes on this movie. Let us see how this turns out for him.

As shown in the trailer, story of 90ML is very simple. Devadas (Karthikeya) has some fatal alcohol syndrome disorder which means he has to intake alcohol right from his childhood. Otherwise, he will die. Going by his habits, Karthikeya joins as a wine shop manager. When things are going fine for him, Devadas falls for Suvasana (Neha Solanki) who comes from a family of stictly no alchohol. That creates the conflict point. Knowing about the truth behind Devadas, Suvasana hates him. Rest of the story is all about how Devadas wins her back and What happened to his alcohol disorder?

Karthikeya has shown improvement as an actor when compared to his previous flicks. He is always a very good emotional actor but in this film his comic timing has improved a lot. His dances are good to watch too. Neha Solanki has done a decent job as love interest to Karthikeya. Roll Rida, Praveen, Raghu, Sudarshan has brought in laughs here and there. Ravi Kishan as a villain with some comic sense is neat. He makes audience laugh with his attire. His character is funny to some extent. Rao Ramesh, Pragathi, Satya Prakash, Prabhakar has done justice to their character. Others have done a decent job.

Story plotline of 90ML is interesting. Movie starts well too. Audience will connect instantly with that point. However, director hasn’t utilized this good start to full extent. Though the point is fresh, treatment goes haywire. Screenplay becomes too predictable. Even audience in their sleep can guess what will happen in the next scene. Direction by Sekhar Reddy is quite mediocre. He couldn’t manage to hold audience interest for long. Editing is bad. Easily 15-20 minutes of the film can be chopped off. Yuvaraj cinematography is not up to the mark. Background music by Anup Rubens is good. When coming to songs, only Vinipinchukoru gets well with the audience. Production designing is excellent.

As said earlier, though the point is fresh, director failed to hold the audience interest. Movie starts on an interesting note. First half an hour is a decent watch evoking some fun. But after all the setup, movie goes into routine mode. All the scenes, we have watched them thousands of times. Treatment is not up to the mark too. However interval block sets up for an interesting second half. Sadly, director hasn’t done justice in this part too. Only first few minutes of second half are watchable. Rest is boring, bland and regular. Movie goes with a pucca formula. Love Scene, Fight Scene and song, some comedy, repeat.

2019 is not a good year to Karthikeya. His movies Hippi, Guna 369, Gang Leader hasn’t done well. With 90ML thought the idea is fresh and universally connected point, treatment is bad. overall, 90ML promises a lot at the start, but ends up as an average fare by the end

Compared to first half, second half is boring.. Though second half starts interestingly, it becomes boring, predictable, routine and lengthy. Climax is a disappointment too. Full review coming soon.

11.21 A.M: Now director is testing the patience of audience. When the movie feels like dragging, he introduces an item song

11.20 A.M: Though the director can conclude the movie there itself, he is dragging the Pre-climax.

11.07 A.M: With high action Police Station episode, Movie is inching towards the climax

10.48 A.M: Devadas out from rehabilitation centre. So 2nd breakup for devadas – suvasana

10.32 A.M: John wick trying to find out Devadas and heroine trying to know about devadas issue

10.28 A.M: Time for breakup song Vinipinchukoru.. Shot very lively. Devadas tries to convince Suvasana but she is in no mood to listen.. As a result song.

10.21 A.M: Second half started with Devadas breakup moment and marriage plans for Suvasana

90ML starts on an interesting note. First 30 minutes is decent, then the movie falls into routine trap. Only at the interval, movie gets attention. It is a good interval block. It all depends on second half to decide fate of the movie.

10.07 A.M: Now, it’s intermission time with a small block.. Hero’s syndrome revealed to Suvasana and his family. Breakup between the two.

09.43 A.M: Ravi Kishan gets introduced as main villain John Wick.. His character is crazy and evoking some laughs.

09.40 A.M: Devadas and family trying to cover up his disability to Suvasana

09.30 A.M: Duet song with simple steps has been shot well

09.19 A.M: Characters being introduced one by one. Comedian Sudarshan makes his entry as Rapo Ravi

09.03 A.M: Hero introduction scene.. Good action block.. Devadas is there for any kind of help for anyone

08.57 A.M: Devadas has unique Fatal alcohol syndrome disorder which means from childhood he will be survived only if he drinks alcohol

It’s show time.. RX 100 fame Karthikeya who is in a position of much needed hit is coming up with the movie 90 ML.. which is universally liked point.

It is known that Nitro Star Sudheer Babu has teamed up with director Mahesh for his upcoming film, which is titled 'Hunt'. Produced by...
Read more
90ML Telugu Movie Review and RatingHero Karthikeya created sensation with the movie RX 100. The movie went onto become blockbuster hit bringing immense craze for Karthikeya. However, the actor failed to grab the craze in his favour by selecting wrong scripts. After back to back flops, Karthikeya is back...